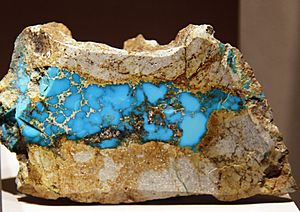 A fine Cerrillos Turquoise specimen at the Smithsonian

Los Cerrillos is a census-designated place (CDP) in Santa Fe County, New Mexico, United States. It is part of the Santa Fe, New Mexico Metropolitan Statistical Area. The population was 229 at the 2000 census. Accessible from State Highway 14 or The Turquoise Trail, Cerrillos is on the road from Santa Fe to Albuquerque, closer to Santa Fe. There are several shops and galleries, a post office, and the Cerrillos Hills State Park, which has five miles of hiking trails. The Cerrillos Turquoise Mining Museum contains hundreds of artifacts from the American Old West and the Cerrillos Mining District. It also displays cardboard cutouts of characters from the film Young Guns and information on other movies which have been filmed in and around Cerrillos. This is a good place to view Cerrillos Turquoise from the Browns' turquoise claim, The Little Chalchihuitl.

According to the United States Census Bureau, the CDP has a total area of 1.4 square miles (3.6 km2), all land.

There were 111 households, out of which 21.6% had children under the age of 18 living with them, 42.3% were married couples living together, 7.2% had a female householder with no husband present, and 46.8% were non-families. 41.4% of all households were made up of individuals, and 7.2% had someone living alone who was 65 years of age or older. The average household size was 2.06 and the average family size was 2.83.

The Tano Indians were the first people in the Cerrillos area. Their pueblos, large and small, were spread out randomly through the Galisteo Basin. Archaeologists believe these sites were occupied by the Tano with no more than a few thousand at one time. Some of the pueblos may have been abandoned when the farm lands wore out. Evidence has shown farm land (Burnt Corn Ruin) five miles east of Cerrillos were destroyed in battle. Tumbled stones, broken potsherds, and discarded tools of rock were discovered as records of their passing.

Many materials were mined out of Cerrillos. A Spanish explorer, Antonio de Espejo, wrote about these treasures being mined at a place of “little hills." This is the source of Cerrillos' name. The Pueblo Indians extracted turquoise from the hills; the Spaniards found gold, silver, and lead. The Tano Indians were used for slave labor to mine these materials out of the hills, but several cave-ins made the Tano stop their excavations. They protested mining and covered up any existence of the mines, which lay dormant for 150 years.

Cerrillos was rediscovered in 1879 by two prospectors from Leadville, Colorado. Word spread fast of the treasures and soon many miners swarmed the hills of Cerrillos. The town became well known and people came from around the world to mine these materials for profit. The settlement started off as a tent city but soon grew into a town of many buildings, homes, a church, a school, and stores.

The rapid growth of Cerrillos gave opportunity for people who moved in. Hotels were built along with saloons, dance halls, shops, and short-order houses. There were not only profits for miners but businesses that provided for them as well. One of the town’s leading businesses was the Cerrillos Supply Company, which stocked equipment miners needed--shovels, picks, tools, steel and fuses, to name a few.

By 1900 the mines began to shut down, and the booming town started to dwindle. A fraction of the population stayed in Cerrillos. Today, only a few of the buildings from Cerrillo's boom remain. Some of the buildings still show evidence of past movies filmed ("Young Guns" and "Outrageous Fortune") on Main Street. The church still stands at the end of Main Street and the local people attend mass on Sunday. A few businesses are open that tourist and locals can use, along with a petting zoo and a trading post featuring Cerrillos turquoise and a mining museum. Cerrillos Hill State Park has 5 miles of multi-use trails with an ADA trail to the village overlook. The State Park is located a half mile north of the village on CR 59.

Previously it was zoned to Capital High School. In 2017 the district recommended changing the boundary of the area to Santa Fe High.

All content from Kiddle encyclopedia articles (including the article images and facts) can be freely used under Attribution-ShareAlike license, unless stated otherwise. Cite this article:
Los Cerrillos, New Mexico Facts for Kids. Kiddle Encyclopedia.