Hawikuh (also spelled Hawikku, meaning "gum leaves" in Zuni), was one of the largest of the Zuni pueblos at the time of the Spanish entrada. It was founded around 1400 AD. It was the first pueblo to be visited and conquered by Spanish explorers.

The pueblo site is located 12 miles (19 km) southwest of Zuni Pueblo, on what is now the Zuni Indian Reservation in Cibola County, New Mexico. In 1960 the site was designated as a National Historic Landmark known as the Hawikuh Ruins. It is included as a contributing part of the Zuni-Cibola Complex of archaeological sites, a larger National Historic Landmark District designated by the United States Department of Interior in 1974. 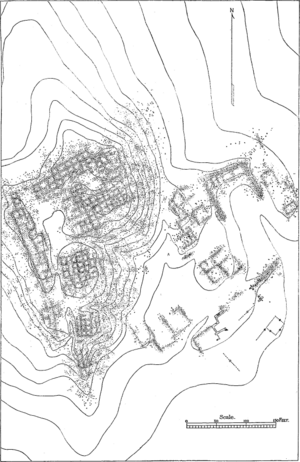 In 1539, Estevanico (Stephen), an enslaved North African assigned to Fray Marcos de Niza's expedition, was the first non-native to visit Hawikuh. He had gained a reputation as a medicine man or shaman after becoming one of the few survivors of a Spanish expedition.

Stephen reached Cibola [Hawikuh] loaded with the large quantity of turquoises they had given him, and some beautiful women whom the Indians who followed him and carried his things were taking with them and had given him. These had followed him from all the settlements he had passed, believing that under his protection they could traverse the whole world without any danger. But as the people in this country were more intelligent than those who followed Stephen, they lodged him in a little hut they had outside their village, and the older men and the governors heard this story and took steps to find out the reason he had come to that country. For three days they made inquiries about him and held a council. The account which the negro gave them of two white men who were following him, sent by a great lord, who knew about the things in the sky, and how these were coming to instruct them in divine matters, made them think that he must be a spy or a guide from some nations who wished to come and conquer them, because it seemed to them unreasonable to say that the people were white in the country from which he came and that he was sent by them, being that he is black. Besides these other reasons, they thought it was hard of him to ask them for turquoises and women, and so they decided to kill him. They did this, but they did not kill any of those who went with him, although they kept some young fellows and let the other, about 60 persons, return freely to their own country. As these, who were badly scared, were returning in flight, they happened to come upon the friars in the desert 60 leagues from Cibola [Hawikuh], and told them the sad news, which frightened them so much that they would not even trust these folks who had been with the negro, but opened the packs they were carrying and gave away everything they had except the holy vestments for saying mass.

Estevanico may have been killed when he unwittingly alarmed Zuni tribesmen with decorations that symbolized death, but this is speculative.

Francisco Vásquez de Coronado conquered the pueblo in 1540, hoping it was one of the legendary "Seven Cities of Gold". He recorded its native name at the time as Cevola, though others who accompanied him wrote it as Cíbola in their accounts. Some say this was derived from a word meaning "buffalo". Coronado was deeply disappointed by the lack of gold. He wrote, "As far as I can tell, these Indians worship water, because it makes the corn grow and sustains their life."

He wrote about the pueblo:

Although they are not decorated with turquoises, nor made of lime or good bricks, nevertheless they are very good houses, with three, four, and five stories, where there are very good apartments ... and some very good rooms underground Kivas, paved, which are made for winter and have something like hot baths.

Some Hawikuu residents fled to the Dowa Yalanne mesa top to escape the attackers of the Coronado expedition. The 14 structures at Dowa Yalanne, which were used as a refuge from the Spaniards between 1540-1680, were called Heshoda Ayahltona ("ancient buildings above").

In 1628 the Spanish established Mission La Purísima Concepción de Hawikuh at this pueblo. The Spanish attempted to suppress the Zuni religion, and introduced the encomienda forced-labor system. In 1632, the Hawikuh Zuni rebelled, burned the church, and killed the priest. In 1672, Apache raiders burned the church. In 1680 it was burned again during the Great Pueblo Revolt, when all the Nuevo México pueblos rose against the Spanish. After this revolt, the Zuni permanently abandoned Hawikuh.

Hawikuh is located within what are now the boundaries of the Zuni Indian Reservation near Zuni, New Mexico. The ruins of Hawikuh were excavated during the period 1917-23 by the Heye Foundation under the leadership of Frederick Webb Hodge, who was assistant director of the Museum of the American Indian. The records and artifacts from this excavation are now held by the National Museum of the American Indian. It acquired Heye's museum collection in 1989.

Hawikuh was declared a [[National Historic Landmark[[ in 1961 by the Department of Interior.

All content from Kiddle encyclopedia articles (including the article images and facts) can be freely used under Attribution-ShareAlike license, unless stated otherwise. Cite this article:
Hawikuh Ruins Facts for Kids. Kiddle Encyclopedia.