The Pueblo people are a group of Native American people who live in the southwestern part of the United States. They speak several different native languages. They are split into two major cultures, based on different systems of kinship. When the Spanish arrived in the 16th century, they were living in communities that the Spanish called pueblos, meaning "towns". Today there are 21 pueblos remaining. The main pueblos are located in the states of New Mexico and Arizona. 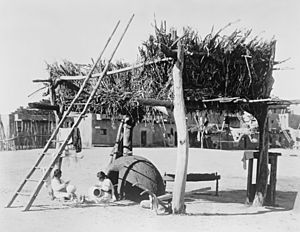 A Zuni drying platform for maize and other foods, with two women crafting pottery beneath it. From the Panama-California Exposition, San Diego, California. January 1915.

In 1844 Josiah Gregg described the historic Pueblo people in The journal of a Santa Fé trader as follows:

When these regions were first discovered it appears that the inhabitants lived in comfortable houses and cultivated the soil, as they have continued to do up to the present time. Indeed, they are now considered the best horticulturists in the country, furnishing most of the fruits and a large portion of the vegetable supplies that are to be found in the markets. They were until very lately the only people in New Mexico who cultivated the grape. They also maintain at the present time considerable herds of cattle, horses, etc. They are, in short, a remarkably sober and industrious race, conspicuous for morality and honesty, and very little given to quarrelling or dissipation ... 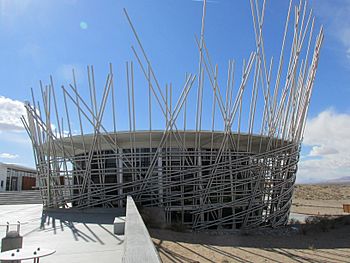 The Puebloans are traditional weavers of cloth and have used textiles, natural fibers and animal hide in their cloth-making. Since woven clothing is laborious and time-consuming, every-day style of dress for working around the villages has been more spare. The men often wore breechcloths.

Corn is the most readily recognizable staple food for Pueblo peoples. Although it is possible that different groups may have grown local plants such as gourds and chenopods at very early dates, the first evidence of maize cultivation in the Southwest dates from about 2100 BCE. Small, fairly undomesticated maize cobs have been found at five different sites in New Mexico and Arizona.

Maize reached the present-day Southwest via an unknown route from Mexico and was rapidly adopted by peoples in the region. One theory states that maize cultivation was carried northward from central Mexico by migrating farmers, most likely speakers of a Uto-Aztecan language. Another theory, more accepted among scholars, is that maize was diffused northward from group to group rather than migrants. There is evidence that maize was initially cultivated in the Southwest during a climatic period when precipitation was relatively high.

The various Pueblo communities have different traditions regarding the making and decoration of pottery artifacts. Present-day archaeologists date the use of pottery by Puebloans dating back the early centuries of the Common Era.

All content from Kiddle encyclopedia articles (including the article images and facts) can be freely used under Attribution-ShareAlike license, unless stated otherwise. Cite this article:
Puebloan peoples Facts for Kids. Kiddle Encyclopedia.