Española is a city primarily in Rio Arriba County, New Mexico, in the United States. A portion of the central and eastern section of the city is in Santa Fe County. Española was founded in 1880 as a railroad village and incorporated as a city in 1925. The city is situated in an area Juan de Oñate declared a capital for Spain in 1598. Española has been called the first capital city in America. At the 2010 census, the city had a total population of 10,495. Española is within the Albuquerque – Santa Fe – Las Vegas combined statistical area.

Española was referred to as La Vega de los Vigiles (Vigil's Meadow) before the presence of railroads. It is believed that the town that began as Española was named by railroad workers. At the time of railroad construction, a small restaurant in the area was nicknamed "La Española". This was because of the large presence of Spanish women in the area. The name became official by 1900 and Española became a small railroad town. Before the railroads, this is where Spanish and Native American people had settled for hundreds of years, making a living from farming along the Rio Grande.

The Española area (known as the "San Juan Valley" to the early Spaniards) is also known as the first European-founded capital of the "New World." The region was explored In 1598 by Don Juan de Oñate. He declared the area a capital for Spain, the area of Don Diego de Vargas' new villa at Santa Cruz. Oñate arrived in the Española area on July 11, 1598, at the confluence of the Chama River and the Rio Grande, where he established a camp at a place then called Yunque-Yunque. He created a Spanish settlement in an area already inhabited by the indigenous descendants of the Anasazi. 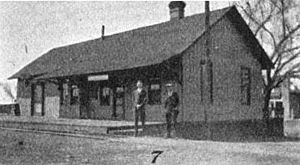 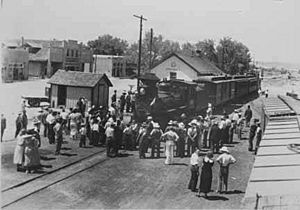 Townspeople gather at the depot, 1930 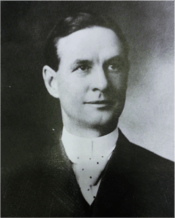 Prior to the arrival of the narrow gauge Denver and Rio Grande Western Railroad (Chili Line) in 1880, the hamlet on the west-side of the Rio Grande was known as La Vega de los Vigiles in reference to the Vigil family who initially settled that area. The earliest document found indicates that La Vegas de los Vigiles had been populated by 1751, over 100 years before the Chili Line's arrival. With the coming of the railroad the name of the hamlet was changed to Española. The Chili Line ran predominantly through the Rocky Mountain region announced a route extension of its narrow gauge into northern New Mexico. The line was built along the Rio Grande, and later was known as the Chili Line. The route would extend into what today is the downtown Española area, and the railroad began selling lots in the area. Anglo merchants, mountain men, and settlers slowly filtered into Española. Frank Bond and his brother George, who were Canadian emigrants would later arrive in the city, together they established the state's largest mercantile and a multi–million dollar wool empire, with them came economic growth and prominence. Española was the headquarters for all the Bond family interests which included over 12 businesses across New Mexico.

Many residents of the nearby town of Santa Fe were not happy with the decision and failure of connection of the railroad, prompting protest. The Española station however, included an engine facility station along with a roundhouse and turntable so it could service the locomotives. The facilities were built but torn down or no longer in use after six years; plans for the town had changed. The railroad would later reach Santa Fe to connect with the Atchison, Topeka and Santa Fe Railway in late 1887.

Frank R. Frankenburger, a business man born in Fort Scott, Kansas, was the first "elected" mayor; he was elected in 1923. The first mayor who was chosen in "popularity" was Frank Bond, in 1907. In 1925 Española was incorporated as a city. As the population rose, there was a high demand for public education in the city. Española High School was established; it would be the largest school in the area for decades. The first high school in the area, however, was Santa Cruz High School. Two miles away from downtown Española, it opened in 1906 in the historic Santa Cruz area. Both high schools are no longer in existence after a merger of school districts in 1975.

The existence of the railroad began to dissipate as minimal passenger traffic and low shipments forced the railroad to close in the early 1940s. Many locals would become unemployed and would follow the railroad to Santa Fe, Albuquerque and central Colorado for jobs. Española's population would fall dramatically and many homes in the downtown became abandoned. Most of the locals who remained would turn to farming as a way of life. Many people saw Española as another failed railroad town. The city removed the railroad tracks and the train depot in the 1960s, and the railroads completely vanished.

Businesses in Española vigorously opposed the abandonment of the Denver & Rio Grande Western Railroad's narrow gauge during the early 1940s. Their calls for continued rail service were at odds with the grim realities of the marketplace, which had for years rendered the "Chili Line" woefully unprofitable. Although Española was an integral part of the saga of railroad construction in the West, it was destined to become one of the region's first notable communities bereft of its trains.

When the Railroad Leaves Town, –Joseph P. Schwieterman
American communities in the age of the rail line abandonment

In the 1980s, many historical buildings and homes of historical significance were torn down for urban renewal. Española followed many other New Mexico cities in this trend, but in Española, it failed. More modern business began to move into town, but the growth of Española had now expanded east across the Rio Grande. Although several buildings of historical significance remain in downtown Española, many are unused or abandoned. Strip malls became visible in Española, the first being the 'Big Rock shopping center', founded by oil tycoon Roy Honstein. With the beginnings of Manhattan Project in nearby Los Alamos, many locals would find jobs at the Los Alamos National Laboratory, which would later employ nearly 9% of Española's population.

In the 1990s, a controversial plan to build a "plaza" and mission church where many historic buildings once stood was up for consideration. The city agreed to the plan, and locals supported the plaza. Although a plaza never existed in Española before the railroads, it was built to pay tribute to the Spanish culture in the area. 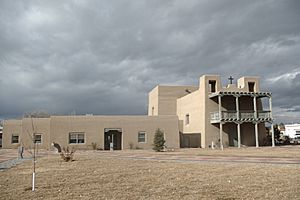 In 1998, Española celebrated the 400th anniversary of the colonization by the Spanish and the founding of the first permanent European colony in North America. The event was celebratory for some and controversial for others.

On September 18, 2008 then Sen. Barack Obama, the Democratic nominee for President of the United States, visited Española for a rally at the city's New Plaza in the Main Street district.

Española lies at an elevation of around 5,595 feet (1,705 m) with much variance. It is in a valley nestled between the Jemez and Sangre de Cristo mountain ranges, and the meeting point of three rivers, the Rio Grande, the Rio Chama, and the Rio Santa Cruz.

There were 5,751 households, of which 35.6% had children under the age of eighteen living with them, 42.5% were married couples living together, 18.5% had a female householder with no husband present, and 31.5% were non-families. 26.2% of all households were made up of single individuals, and 9.7% had someone living alone who was sixty-five years of age or older. The average household size was 2.56 and the average family size was 3.08.

There has been a steady influx of undocumented immigration to the Valley for the last decade, which has significantly increased their visibility and influence in the area. Española (especially the neighboring community of Sombrillo) is also home to the largest community of ethnically diverse Sikhs in the world. While most Sikhs descend from the Punjab region of India, the Sikhs in Española come from all over the world.

The fountain at Plaza de Espanola was designed as a replica of the Alhambra. The plaza is home to the Convent Mission, administered by the Episcopal Church.

Satview Broadband, headquartered in Reno, is the local cable television company and is served by Winstream Communications for telecom and broadband service.

Española's restaurants and convenience stores are popular with travelers between Santa Fe and northern communities, as well as with local people. The local fiestas are held in the summer and to commemorate the cultural diversity of the city.The fiestas include live New Mexico and/or country music, vendors and parades.

There are many locations near Española that provide for outdoor activity such as hiking, biking, and river sports like rafting and kayaking. Nearby winter sports include skiing (downhill and cross-country) and snowboarding.

All content from Kiddle encyclopedia articles (including the article images and facts) can be freely used under Attribution-ShareAlike license, unless stated otherwise. Cite this article:
Española, New Mexico Facts for Kids. Kiddle Encyclopedia.