The Alhambra ("The Red One" - because of the color of the red clay of the surroundings of which the fort is made), is a palace and fortress complex located in Granada, Andalusia, Spain. It was originally constructed as a small fortress in AD 889 on the remains of Roman fortifications, and then largely ignored until its ruins were renovated and rebuilt in the mid-13th century by the Nasrid emir Mohammed ben Al-Ahmar of the Emirate of Granada, who built its current palace and walls.

It was converted into a royal palace in 1333 by Yusuf I, Sultan of Granada. After the conclusion of the Christian Reconquista in 1492, the site became the Royal Court of Ferdinand and Isabella (where Christopher Columbus received royal endorsement for his expedition), and the palaces were partially altered in the Renaissance style.

In 1526 Charles I & V commissioned a new Renaissance palace better befitting the Holy Roman Emperor, but it was ultimately never completed due to Morisco rebellions in Granada.

Alhambra's last Islamic palaces were built for the last Muslim emirs in Spain during the decline of the Nasrid dynasty, who were increasingly subject to the Christian Kings of Castile. 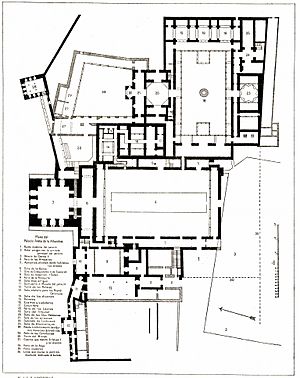 Plan of the Palacio Arabe 1889

After being allowed to fall into disrepair for centuries, the buildings occupied by squatters, Alhambra was rediscovered following the defeat of Napoleon, who had retaliated by destroying the site. The re-discoverers were first the British and then other north European Romantic travelers.

The Alhambra tiles are remarkable in that they contain nearly all, if not all, of the seventeen mathematically possible wallpaper groups. This is a unique accomplishment in world architecture. M. C. Escher's visit in 1922 and study of the Moorish use of symmetries in the Alhambra tiles inspired his work on tessellation.

There is a main belt asteroid named Alhambra.

It is now one of Spain's major tourist attractions, exhibiting the country's most significant and well-known Islamic architecture, together with 16th-century and later Christian building and gardens. The Alhambra is a UNESCO World Heritage Site and the inspiration for many songs and stories.

All content from Kiddle encyclopedia articles (including the article images and facts) can be freely used under Attribution-ShareAlike license, unless stated otherwise. Cite this article:
Alhambra Facts for Kids. Kiddle Encyclopedia.