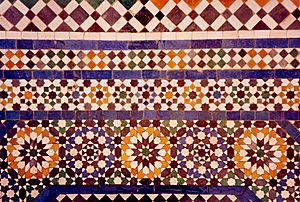 Ceramic Tiles in Marrakech, forming edge-to-edge, regular and other tessellations

Tessellation of a flat surface refers to the repeated placement of shapes with no overlaps and no gaps. These shapes are also called tiles. In mathematics, tessellations can be generalized to higher dimensions and a variety of geometries.

Tessellations frequently appeared in the art of M. C. Escher. Tessellations are seen throughout art history, from ancient architecture to modern art.

In Latin, tessella is a small cubical piece of clay, stone or glass used to make mosaics. The word "tessella" means "small square" (from "tessera", square, which in its turn is from the Greek word "τέσσερα" for "four"). It corresponds with the everyday term tiling which refers to applications of tessellations, often made of glazed clay.

Examples of tessellations in the real world include honeycombs and pavement tiling.

In 1619 Johannes Kepler made one of the first documented studies of tessellations when he wrote about regular and semiregular tessellation, which are coverings of a plane with regular polygons, in his Harmonices Mundi. Some two hundred years later in 1891, the Russian crystallographer Yevgraf Fyodorov proved that every periodic tiling of the plane features one of seventeen different groups of isometries. Fyodorov's work marked the unofficial beginning of the mathematical study of tessellations. Other prominent contributors include Shubnikov and Belov (1951); and Heinrich Heesch and Otto Kienzle (1963). 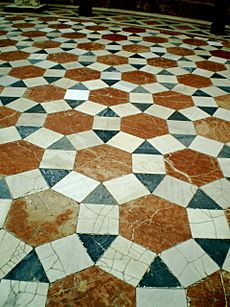 Tessellation in two dimensions, also called planar tiling, is a topic in geometry that studies how shapes, known as tiles, can be arranged to fill a plane without any gaps, according to a given set of rules. These rules can be varied. Common ones are that there must be no gaps between tiles, and that no corner of one tile can lie along the edge of another. 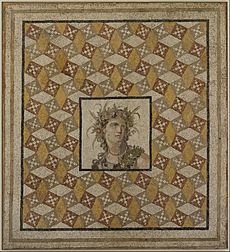 Roman mosaic floor panel of stone, tile and glass, from a villa near Antioch in Roman Syria. 2nd century AD

In architecture, tessellations have been used to create decorative motifs since ancient times. Mosaic tilings often had geometric patterns. Later civilisations also used larger tiles, either plain or individually decorated. Some of the most decorative were the Moorish wall tilings of Islamic architecture, using Girih and Zellige tiles in buildings such as the Alhambra and La Mezquita. 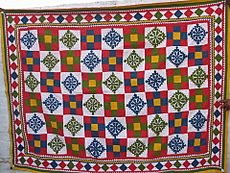 Tessellated designs often appear on textiles, whether woven, stitched in or printed. Tessellation patterns have been used to design interlocking motifs of patch shapes in quilts.

Tessellations are also a main genre in origami (paper folding), where pleats are used to connect molecules such as twist folds together in a repeating fashion.

Tessellation is used in manufacturing industry to reduce the wastage of material (yield losses) such as sheet metal when cutting out shapes for objects like car doors or drinks cans.

Tessellation is apparent in the mudcrack-like cracking of thin films – with a degree of self-organisation being observed using micro and nanotechnologies. 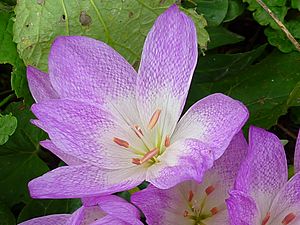 Basaltic lava flows often display columnar jointing as a result of contraction forces causing cracks as the lava cools. The extensive crack networks that develop often produce hexagonal columns of lava. One example of such an array of columns is the Giant's Causeway in Northern Ireland.

Tessellated pavement, a characteristic example of which is found at Eaglehawk Neck on the Tasman Peninsula of Tasmania, is a rare sedimentary rock formation where the rock has fractured into rectangular blocks.

Within botany, the term "tessellate" describes a checkered pattern, for example on a flower petal, tree bark, or fruit.

All content from Kiddle encyclopedia articles (including the article images and facts) can be freely used under Attribution-ShareAlike license, unless stated otherwise. Cite this article:
Tessellation Facts for Kids. Kiddle Encyclopedia.