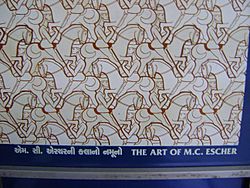 Maurits Cornelis Escher (17 June 1898 – 27 March 1972), usually referred to as M. C. Escher, was a Dutch graphic artist born in Leeuwarden, Netherlands. He is known for his often mathematically inspired woodcuts, lithographs and mezzotints. These feature impossible constructions, explorations of infinity, architecture and tessellations (means "like tiles").

During his life, Escher made 448 lithographs, woodcuts and wood engravings. He did over 2000 drawings and sketches. He also illustrated books, designed tapestries, postage stamps and murals.

Escher was interested in different ways of making art, he used tile-like repeated patterns in many of his paintings. Early in his career he drew inspirations of nature: he studied art, landscapes and insects. Some of Escher’s most famous drawings include: Drawing hands, Relativity and Flying Fish.

Most of his works were related to maths. 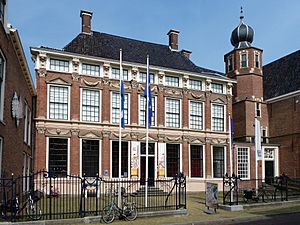 Maurits Cornelis Escher was born on 17 June 1898 in Leeuwarden, Friesland, the Netherlands, in a house that forms part of the Princessehof Ceramics Museum today. He was the youngest son of the civil engineer George Arnold Escher and his second wife, Sara Gleichman.

In 1903, the family moved to Arnhem, where he attended primary and secondary school until 1918. Known to his friends and family as "Mauk", he was a sickly child and was placed in a special school at the age of seven; he failed the second grade. Although he excelled at drawing, his grades were generally poor. He took carpentry and piano lessons until he was thirteen years old.

In 1918, he went to the Technical College of Delft. From 1919 to 1922, Escher attended the Haarlem School of Architecture and Decorative Arts, learning drawing and the art of making woodcuts. He briefly studied architecture, but he failed a number of subjects (due partly to a persistent skin infection) and switched to decorative arts, studying under the graphic artist Samuel Jessurun de Mesquita. 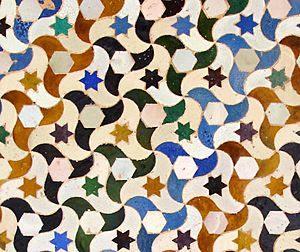 Moorish tessellations including this one at the Alhambra inspired Escher's work with tilings of the plane. He made sketches of this and other Alhambra patterns in 1936.

He was impressed by the Italian countryside and, in Granada, by the Moorish architecture of the fourteenth-century Alhambra. The intricate decorative designs of the Alhambra, based on geometrical symmetries featuring interlocking repetitive patterns in the coloured tiles or sculpted into the walls and ceilings, triggered his interest in the mathematics of tessellation and became a powerful influence on his work.

Escher returned to Italy and lived in Rome from 1923 to 1935. While in Italy, Escher met Jetta Umiker – a Swiss woman, like himself attracted to Italy.

The townscapes and landscapes of these places feature prominently in his artworks. In May and June 1936, Escher travelled back to Spain, revisiting the Alhambra and spending days at a time making detailed drawings of its mosaic patterns. It was here that he became fascinated, to the point of obsession, with tessellation, explaining:

It remains an extremely absorbing activity, a real mania to which I have become addicted, and from which I sometimes find it hard to tear myself away.

The sketches he made in the Alhambra formed a major source for his work from that time on. He also studied the architecture of the Mezquita, the Moorish mosque of Cordoba. This turned out to be the last of his long study journeys; after 1937, his artworks were created in his studio rather than in the field.

His art correspondingly changed sharply from being mainly observational, with a strong emphasis on the realistic details of things seen in nature and architecture, to being the product of his geometric analysis and his visual imagination. All the same, even his early work already shows his interest in the nature of space, the unusual, perspective, and multiple points of view.

In 1935, the political climate in Italy (under Mussolini) became unacceptable to Escher.

When his eldest son, George, was forced at the age of nine to wear a Ballila uniform in school, the family left Italy and moved to Château-d'Œx, Switzerland, where they remained for two years.

The Netherlands post office had Escher design a semi-postal stamp for the "Air Fund" in 1935, and again in 1949 he designed Netherlands stamps. These were for the 75th anniversary of the Universal Postal Union; a different design was used by Surinam and the Netherlands Antilles for the same commemoration.

Escher, who had been very fond of and inspired by the landscapes in Italy, was decidedly unhappy in Switzerland. In 1937, the family moved again, to Uccle (Ukkel), a suburb of Brussels, Belgium.

World War II forced them to move in January 1941, this time to Baarn, Netherlands, where Escher lived until 1970. Most of Escher's best-known works date from this period. The sometimes cloudy, cold, and wet weather of the Netherlands allowed him to focus intently on his work.

After 1953, Escher lectured widely. A planned series of lectures in North America in 1962 was cancelled after an illness, and he stopped creating artworks for a time, but the illustrations and text for the lectures were later published as part of the book Escher on Escher.

He was awarded the Knighthood of the Order of Orange-Nassau in 1955; he was later made an Officer in 1967.

In July 1969 he finished his last work, a large woodcut with threefold rotational symmetry called Snakes, in which snakes wind through a pattern of linked rings. The image encapsulates Escher's love of symmetry; of interlocking patterns; and, at the end of his life, of his approach to infinity. The care that Escher took in creating and printing this woodcut can be seen in a video recording.

Escher moved to the Rosa Spier Huis in Laren in 1970, an artists' retirement home in which he had his own studio.

Escher's work is very mathematical. Escher is not the first artist to explore mathematical themes.

Parmigianino (1503–1540) had explored spherical geometry and reflection in his 1524 Self-portrait in a Convex Mirror, depicting his own image in a curved mirror, while William Hogarth's 1754 Satire on False Perspective foreshadows Escher's playful exploration of errors in perspective.

Another early artistic forerunner is Giovanni Battista Piranesi (1720–1778), whose dark "fantastical" prints such as The Drawbridge in his Carceri ("Prisons") sequence depict perspectives of complex architecture with many stairs and ramps, peopled by walking figures.

Only with 20th century movements such as Cubism, De Stijl, Dadaism, and Surrealism did mainstream art start to explore Escher-like ways of looking at the world with multiple simultaneous viewpoints. However, although Escher had much in common with, for example, Magritte's surrealism, he did not make contact with any of these movements. 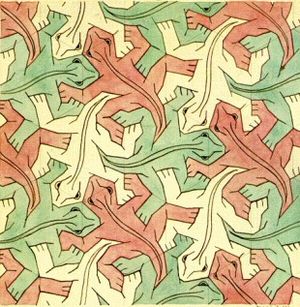 Hexagonal tessellation with animals: Study of Regular Division of the Plane with Reptiles (1939). Escher reused the design in his 1943 lithograph Reptiles.

In his early years, Escher sketched landscapes and nature. He also sketched insects such as ants, bees, grasshoppers, and mantises,, which appeared frequently in his later work.

His early love of Roman, Italian landscapes and of nature created an interest in tessellation, which he called Regular Division of the Plane; this became the title of his 1958 book, complete with reproductions of a series of woodcuts based on tessellations of the plane, in which he described the systematic buildup of mathematical designs in his artworks. He wrote, "Mathematicians have opened the gate leading to an extensive domain".

After his 1936 journey to the Alhambra and to La Mezquita, Cordoba, where he sketched the Moorish architecture and the tessellated mosaic decorations, Escher began to explore the properties and possibilities of tessellation using geometric grids as the basis for his sketches.

He then extended these to form complex interlocking designs, for example with animals such as birds, fish, and reptiles. One of his first attempts at a tessellation was his pencil, India ink, and watercolour Study of Regular Division of the Plane with Reptiles (1939), constructed on a hexagonal grid. The heads of the red, green, and white reptiles meet at a vertex; the tails, legs, and sides of the animals interlock exactly. It was used as the basis for his 1943 lithograph Reptiles. 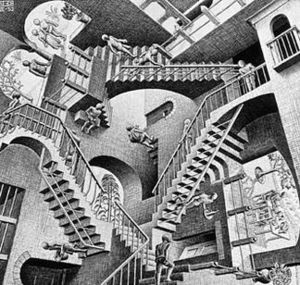 Although Escher did not have mathematical training—his understanding of mathematics was largely visual and intuitive — his art had a strong mathematical component, and several of the worlds that he drew were built around impossible objects.

After 1924, Escher turned to sketching landscapes in Italy and Corsica with irregular perspectives that are impossible in natural form.

His first print of an impossible reality was Still Life and Street (1937); impossible stairs and multiple visual and gravitational perspectives feature in popular works such as Relativity (1953). 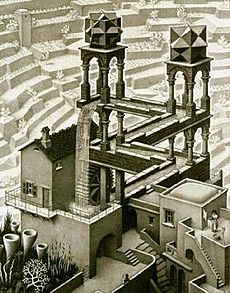 House of Stairs (1951) attracted the interest of the mathematician Roger Penrose and his father, the biologist Lionel Penrose. In 1956, they published a paper, "Impossible Objects: A Special Type of Visual Illusion" and later sent Escher a copy. Escher replied, admiring the Penroses' continuously rising flights of steps, and enclosed a print of Ascending and Descending (1960). The paper also contained the tribar or Penrose triangle, which Escher used repeatedly in his lithograph of a building that appears to function as a perpetual motion machine, Waterfall (1961).

Escher worked primarily in the media of lithographs and woodcuts, although the few mezzotints he made are considered to be masterpieces of the technique.

In his graphic art, he portrayed mathematical relationships among shapes, figures, and space. Integrated into his prints were mirror images of cones, spheres, cubes, rings, and spirals.

Escher was also fascinated by mathematical objects such as the Möbius strip, which has only one surface. His wood engraving Möbius Strip II (1963) depicts a chain of ants marching forever over what, at any one place, are the two opposite faces of the object—which are seen on inspection to be parts of the strip's single surface. In Escher's own words:

An endless ring-shaped band usually has two distinct surfaces, one inside and one outside. Yet on this strip nine red ants crawl after each other and travel the front side as well as the reverse side. Therefore the strip has only one surface.

Platonic and other solids 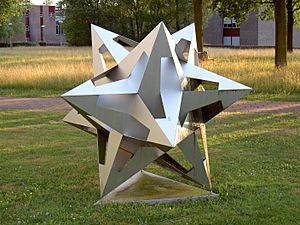 Sculpture of a small stellated dodecahedron, as in Escher's 1952 work Gravitation (University of Twente)

Escher's artwork is especially well-liked by mathematicians such as Doris Schattschneider and scientists such as Roger Penrose, who enjoy his use of polyhedra and geometric distortions. For example, in Gravitation, animals climb around a stellated dodecahedron. 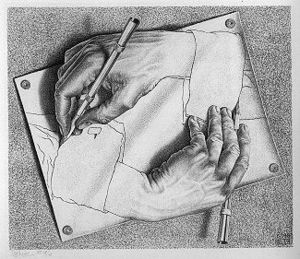 Escher's artistic expression was created from images in his mind, rather than directly from observations and travels to other countries. His interest in the multiple levels of reality in art is seen in works such as Drawing Hands (1948), where two hands are shown, each drawing the other. 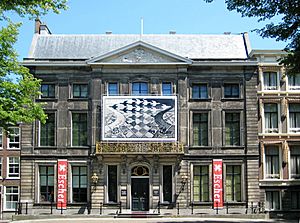 The Escher Museum in The Hague. The poster shows a detail from Day and Night, 1938

Escher's special way of thinking and rich graphics have had a continuous influence in mathematics and art, as well as in popular culture.

In mathematics and science 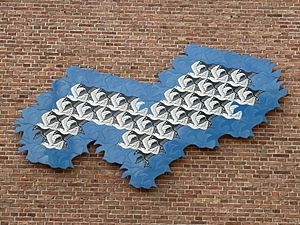 The classification of regular tilings using the edge relationships of tiles:

The Pulitzer Prize-winning 1979 book Gödel, Escher, Bach by Douglas Hofstadter discusses the ideas of self-reference and strange loops, drawing on a wide range of artistic and scientific sources including Escher's art and the music of J. S. Bach.

All content from Kiddle encyclopedia articles (including the article images and facts) can be freely used under Attribution-ShareAlike license, unless stated otherwise. Cite this article:
M. C. Escher Facts for Kids. Kiddle Encyclopedia.