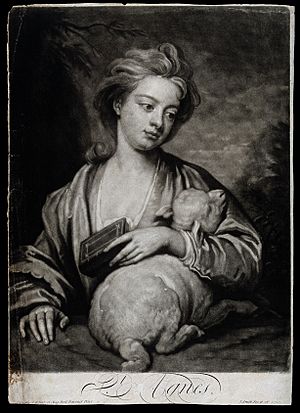 Saint Agnes, mezzotint by John Smith after Godfrey Kneller, usually thought to be a portrait of his daughter, Catherine Voss, by his mistress.

Mezzotint is a printmaking process of the intaglio family, technically a drypoint method. It was the first tonal method to be used, enabling half-tones to be produced without using line- or dot-based techniques like hatching, cross-hatching or stipple. Mezzotint achieves tonality by roughening a metal plate with thousands of little dots made by a metal tool with small teeth, called a "rocker". In printing, the tiny pits in the plate retain the ink when the face of the plate is wiped clean. This technique can achieve a high level of quality and richness in the print.

Mezzotint is often combined with other intaglio techniques, usually etching and engraving. The process was especially widely used in England from the eighteenth century, to reproduce portraits and other paintings. It was somewhat in competition with the other main tonal technique of the day, aquatint. Since the mid-nineteenth century it has been relatively little used, as lithography and other techniques produced comparable results more easily. Robert Kipniss and Peter Ilsted are two notable 20th-century exponents of the technique; M. C. Escher also made eight mezzotints.

All content from Kiddle encyclopedia articles (including the article images and facts) can be freely used under Attribution-ShareAlike license, unless stated otherwise. Cite this article:
Mezzotint Facts for Kids. Kiddle Encyclopedia.