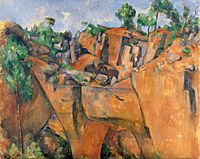 A painting by Paul Cézanne, an artist who influenced the Cubists 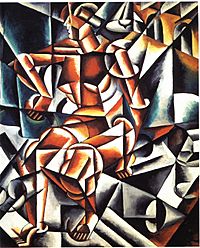 Cubism was one of the most significant art movements of the 20th century. It began in France about 1907, and flourished from 1910 through the 1920s. It was pioneered by Georges Braque and Pablo Picasso.

The first organized group exhibition by Cubists took place at the Salon des Indépendants in Paris in the spring of 1911. It included works by Jean Metzinger, Albert Gleizes, Fernand Léger, Robert Delaunay and Henri Le Fauconnier, but no works by Picasso and Braque were exhibited.

According to one art historian, there were three phases of Cubism. There was "Early Cubism", (from 1906 to 1908) when the movement was initially developed by Picasso and Braque. In the second phase, "High Cubism", (from 1909 to 1914), Juan Gris emerged as an important exponent after 1911. Finally "Late Cubism" (from 1914 to 1921) was the last phase of Cubism as a radical avant-garde movement. Douglas Cooper's emphasis on the work of Braque, Picasso, Gris (from 1911) and Léger (to a lesser extent) was an intentional value judgement.

Cubism is a style of art which aims to show all of the possible viewpoints of a person or an object all at once. It is called Cubism because the items represented in the artworks look like they are made out of cubes and other geometrical shapes. Cubism was first started by Pablo Picasso and Georges Braque. Analytical Cubism is the first type of cubism. Most analytical Cubists painted and drew in monochrome (only one colour) so that the person who was looking at the painting did not pay attention to colour, but only to the shapes and the forms that were being shown.

This was changed in 1912 when Picasso first started painting with colours and using collages. Collage is when you glue together different cut-up pieces of paper to make an artwork. This new form of Cubism was called Synthetic Cubism. Picasso invented collage because he was tired of the way he was making his art, and wanted to try out something new. Pablo Picasso created over 20,000 pictures. From 1912 to 1919 was Picasso's Synthetic Cubism Period.

All content from Kiddle encyclopedia articles (including the article images and facts) can be freely used under Attribution-ShareAlike license, unless stated otherwise. Cite this article:
Cubism Facts for Kids. Kiddle Encyclopedia.