Crystallography is the study of the arrangement of atoms in solids.

Before the development of X-ray crystallography, the study of crystals was based on their geometry. This involves measuring the angles of crystal faces, and establishing the symmetry of the crystal in question.

Crystal structure is now found by analysis of the diffraction patterns of a sample targeted by a beam of some type.

The technique was jointly invented by Sir William Bragg (1862–1942) and his son Sir Lawrence Bragg (1890–1971), who jointly won the Nobel Prize in Physics for 1915. Lawrence Bragg was the youngest to become a Nobel Laureate. He was the Director of the Cavendish Laboratory, Cambridge University, when the discovery of the structure of DNA was made by James D. Watson and Francis Crick in February 1953.

X-rays are most commonly used, but for some purposes electrons or neutrons are used. Because of the different forms of interaction, the three types of radiation are suitable for different crystallographic studies.

Some materials studied using crystallography, proteins for example, do not occur naturally as crystals. Such molecules are placed in solution and allowed to crystallize over days, weeks, or months.

Once a crystal is obtained, data can be collected using a beam of radiation. Although X-ray equipment is commonplace, crystallography often uses special synchrotron light sources to make X-rays. They produce purer and more complete patterns. Synchrotron sources also have a much higher intensity of X-ray beams, so data collection takes a fraction of the time normally necessary at weaker sources.

Producing an image from a diffraction pattern requires sophisticated mathematics.

The mathematical methods for the analysis of diffraction data only apply to patterns, which in turn result only when waves diffract from orderly arrays. Hence crystallography applies for the most part only to crystals, or to molecules which can be got to crystallize.

In spite of this, a certain amount of molecular information can be deduced from the patterns that are generated by fibres and powders. For example, the double-helical structure of DNA was deduced from an X-ray diffraction pattern that had been got from a fibrous sample. 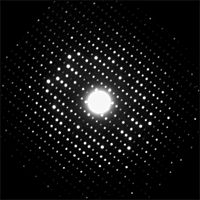 Electron crystallography is a method to determine the arrangement of atoms in solids using a transmission electron microscope (TEM). The method was invented by Aaron Klug, who won the Nobel Prize in Chemistry for this, and his studies on virus structures and transfer RNA, in 1982.

The first electron crystallographic protein structure to achieve atomic resolution was bacteriorhodopsin in 1990.

An example of a cubic lattice

Crystallography is a tool that is often employed in materials science. The understanding of crystal structures is needed to understand crystallographic defects.

A number of other physical properties are linked to crystallography. For example, the minerals in clay form small, flat, platelike structures. Clay can be easily deformed because the platelike particles can slip along each other in the plane of the plates, yet remain strongly connected in the direction perpendicular to the plates. Such mechanisms can be studied by crystallographic texture measurements.

Crystallography includes the symmetry patterns which can be formed by atoms in a crystal.

X-ray crystallography was the primary method for determining the 3-D molecular structure of biological macromolecules. The most important of these are enzymes, and nucleic acids such as DNA and RNA. In fact, the double helix structure of DNA was worked out from crystallographic data.

The first crystal structure of a macromolecule was solved in 1958 The Protein Data Bank (PDB) is a freely accessible repository for the structures of proteins and other biological macromolecules. Computer programs can be used to help visualize biological molecular structures.

All content from Kiddle encyclopedia articles (including the article images and facts) can be freely used under Attribution-ShareAlike license, unless stated otherwise. Cite this article:
Crystallography Facts for Kids. Kiddle Encyclopedia.