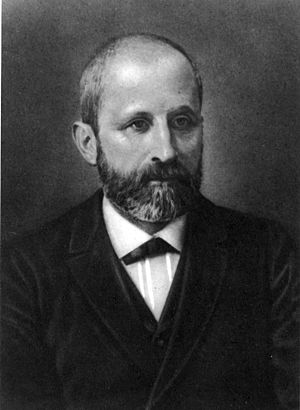 The Swiss scientist Friedrich Miescher discovered nucleic acids (DNA) in 1869. Later, he raised the idea that they could be involved in heredity.

The nucleic acids are made of nucleotides. A nucleotide is made of a nitrogenous base, sugar with five carbon atoms and a phosphate group.

DNA is organized into chromosomes and found within the nucleus of our cells. Its function in any cell is to carry the sequence of bases which will be transcribed into RNA. The function of RNA is much more difficult to explain. One well-known function is for messenger RNA to be translated into proteins, mainly enzymes. But there are other types of RNA, and these are called non-coding RNAs.

All content from Kiddle encyclopedia articles (including the article images and facts) can be freely used under Attribution-ShareAlike license, unless stated otherwise. Cite this article:
Nucleic acid Facts for Kids. Kiddle Encyclopedia.