He is one of those who worked out the structure of DNA. Using X-ray crystallography results from Maurice Wilkins' biophysics team at King's College London, Crick and James Watson discovered that DNA has what is called a "double helix structure".

This means that DNA is made of two chains wound round each other to make a spiral. Only one of the chains carries information, but the two chains together makes the molecule more stable. DNA is the basis of heredity for almost all forms of life today.

Crick, Watson and Wilkins won the Nobel Prize in Physiology or Medicine for 1962. Their work sparked a huge amount of research in molecular and cell biology and, as a result, many subsequent Nobel awards have been made. 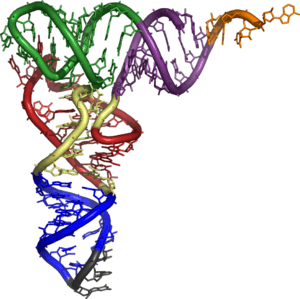 Molecular model of a tRNA molecule. Crick predicted that such adaptor molecules might be links between codons and amino acids.

During the mid-to-late 1950s Crick helped sort out the way proteins are synthesized. In 1958, Crick's listed all the key features of the protein synthesis process:

The adaptor molecules were eventually shown to be tRNAs and the catalytic "ribonucleic-protein complexes" became known as ribosomes. An important step was later realization (in 1960) that the messenger RNA was not the same as the ribosomal RNA.

The next fundamental question was the exact nature of the genetic code. In his 1958 article, Crick speculated, as had others, that a triplet of nucleotides could code for an amino acid. Crick also used the term "central dogma" to summarize an idea that implies that genetic information flow between macromolecules would be essentially one-way:

In his thinking about the processes linking DNA genes to proteins, Crick made clear the distinction between the materials involved, the energy required, and the information flow. Crick was focused on this third component (information) and it became the organizing principle of what became known as molecular biology.

In the final phase of his career, Crick and Christof Koch published a series of articles on consciousness (1990–2005).

Crick decided to focus his work on how the brain generates visual awareness within a few hundred milliseconds of viewing a scene. Crick's book The Astonishing Hypothesis made the argument that neuroscience now had the tools required to begin a scientific study of how brains produce conscious experiences.

The Institute will be built next to St Pancras station on the Euston Road. It will have an annual budget of over £100 million. The building’s vaulted roof is arranged into two shells and will be fitted with solar panels. A third of the building will be below ground to reduce its visible mass.

All content from Kiddle encyclopedia articles (including the article images and facts) can be freely used under Attribution-ShareAlike license, unless stated otherwise. Cite this article:
Francis Crick Facts for Kids. Kiddle Encyclopedia.