Rosalind Franklin (Notting Hill, London, 25 July 1920 – London, 16 April 1958) was a British biophysicist, known for her contributions to the discovery of the structure of DNA. She also worked on coal, studies of RNA, and viruses. She was one of the first people to do X-ray crystallography on DNA. The work of Franklin and the graduate student Raymond Gosling were used by Watson and Crick in their effort to discover the structure of DNA.

Franklin died from ovarian cancer in 1958. Nobel Prizes are not awarded after a person's death, so she was not considered for the 1962 Nobel Prize in Physiology or Medicine. It was awarded to Francis Crick, James D. Watson and Maurice Wilkins.

Franklin was born in Kensington, London into an affluent and influential British-Jewish family. Her uncle was Herbert Samuel (later Viscount Samuel) who was Home Secretary in 1916 and the first practicing Jew to serve in the British Cabinet. He was also the first High Commissioner (effectively governor) for the British Mandate of Palestine.

Her aunt Helen was married to Norman Bentwich, who was Attorney General in the British Mandate of Palestine. She was active in trade union organization and women's suffrage, and was later a member of the London County Council.

Franklin was educated at St Paul's Girls' School where she excelled in Latin and sport. Her family were actively involved with a Working Men's College, where Ellis Franklin, her father, taught electricity, magnetism and the history of the Great War in the evenings and later became vice principal. Later they helped settle Jewish refugees from Europe who had escaped the Nazis.

In the summer of 1938 Franklin went to Newnham College, Cambridge. She passed her finals in 1941, but was only awarded a degree titular, as women were not entitled to degrees (BA Cantab.) from Cambridge at the time. In 1945 Rosalind Franklin received her PhD from Cambridge University.

She worked for Ronald Norish between 1941 and 1942. Because of her desire to work during World War II, she worked at the British Coal Utilisation Research Association in Kingston-upon-Thames from August 1942, studying the porosity of coal. Her work helped spark the idea of high-strength carbon fibres and was the basis of her doctoral degree-"The physical chemistry of solid organic colloids with special reference to coal and related materials" that she earned in 1945.

After the war ended Franklin accepted an offer to work in Paris with Jacques Mering. She learned x-ray diffraction techniques during her three years at the Laboratoire central des services chimiques de l'État. She seemed to have been very happy there and earned an international reputation based on her published research on the structure of coal. In 1950 she sought work in England and in June 1950 she was appointed to a position at King's College London.

In January 1951, Franklin started working as a research associate at King's College London in the Medical Research Council's (MRC) Biophysics Unit, directed by John Randall. Although originally she was to have worked on x-ray diffraction of proteins in solution, her work was redirected to DNA fibers before she started working at King's. Maurice Wilkins and Raymond Gosling had been carrying out x-ray diffraction analysis of DNA in the Unit since 1950.

Franklin, working with her student Raymond Gosling started to apply her expertise in x-ray diffraction techniques to the structure of DNA. They discovered that there were two forms of DNA: at high humidity (when wet) the DNA fiber became long and thin, when it was dried it became short and fat. These were termed DNA 'B' and 'A' respectively. The work on DNA was subsequently divided, Franklin taking the A form to study and Wilkins the 'B' form. The x-ray diffraction pictures taken by Franklin at this time have been called, by J. D. Bernal, "amongst the most beautiful x-ray photographs of any substance ever taken".

By the end of 1951 it was generally accepted in King's that the B form of DNA was a helix, but Franklin in particular was unconvinced that the A form of DNA was helical in structure. As a practical joke Franklin and Gosling produced a death notice regretting the loss of helical crystalline DNA (A-DNA). During 1952 Rosalind Franklin and Raymond Gosling worked at applying the Patterson function to the x-ray pictures of DNA they had produced, this was a long and labour-intensive approach but would give an insight into the structure of the molecule.

In February 1953 Francis Crick and James D. Watson of the Cavendish Laboratory in Cambridge University had started to build a model of the B form of DNA using similar data to that available to the team at King's. Model building had been applied successfully in the elucidation of the structure of the alpha helix by Linus Pauling in 1951, but Rosalind Franklin was opposed to building theoretical models, taking the view that building a model was only to be undertaken after the structure was known. Watson and Crick then indirectly obtained a prepublication version of Franklin's DNA X-ray diffraction data (possibly without her knowledge), and a prepublication manuscript by Pauling and Corey, giving them critical insights into the DNA structure.

Francis Crick and James Watson then published their model in Nature on 25 April 1953 in an article describing the double-helical structure of DNA with a small footnote to Franklin's data. Articles by Wilkins and Franklin illuminating their x-ray diffraction data published in the same issue of Nature supported the Crick and Watson model for the B form of DNA. Franklin eventually left King's College London in March 1953 to move to Birkbeck College in a move that had been planned for some time. Franklin was not offered a faculty position at Oxford and also asked to agree not to continue her project in 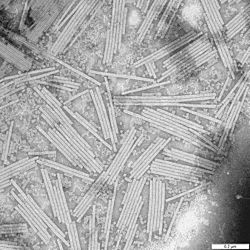 Franklin's work in Birkbeck involved the use of x-ray crystallography to study the structure of the tobacco mosaic virus (TMV) under J. D. Bernal and was funded by the Agricultural Research Council(ARC). In 1954 Franklin began a longstanding and successful collaboration with Aaron Klug. In 1955 Franklin had a paper published in the journal Nature, indicating that TMV virus particles were all of the same length, this was in direct contradiction to the ideas of the eminent virologist Norman Pirie, though her observation ultimately proved correct.

Franklin worked on rod like viruses such as TMV with her Ph.D. student Kenneth Holmes, while Aaron Klug worked on spherical viruses with his student John Finch, Franklin coordinated the work and was in charge. Franklin also had a research assistant, James Watt, subsidised by the National Coal Board and was now the Leader of the "ARC Group" at Birkbeck. By the end of 1955 her team had completed a model of the TMV and were working on viruses affecting several plants, including potato, turnip, tomato and pea. Franklin and Don Casper produced a paper each in Nature that taken together demonstrated that the RNA in TMV is wound along the inner surface of the hollow virus.

She fell ill on the 30th of March and died at Chelsea, London on April 16, 1958. Exposure to X-ray radiation is sometimes considered a possible factor in her illness, though she was no more careless than other laboratory staff of the time. Other members of her family have died of cancer as well.

All content from Kiddle encyclopedia articles (including the article images and facts) can be freely used under Attribution-ShareAlike license, unless stated otherwise. Cite this article:
Rosalind Franklin Facts for Kids. Kiddle Encyclopedia.