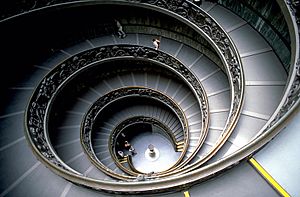 The staircase in the Vatican Museums. This shows a helix.

In math, a helix is a curve in three dimensions. It looks a bit like a spiral. Each helix has a line called its axis. The helix has a constant angle to this line. Helices are often seen in nature and the sciences. 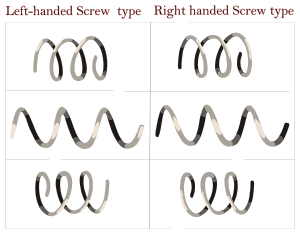 Two types of helix shown in comparison. This shows the two chiralities of helices. One is left-handed and the other is right-handed. Each row compares the two helices from a different perspective. The chirality is a property of the object, not of the perspective (view-angle)

The pitch of a helix is the height of one complete helix turn, measured parallel to the axis of the helix.

A double helix consists of two (typically congruent) helices with the same axis, differing by a translation along the axis.

A conic helix may be defined as a spiral on a conic surface, with the distance to the apex an exponential function of the angle indicating direction from the axis. An example is the Corkscrew roller coaster at Cedar Point amusement park.

A circular helix, (i.e. one with constant radius) has constant band curvature and constant torsion.

A curve is called a slant helix if its principal normal makes a constant angle with a fixed line in space. It can be constructed by applying a transformation to the moving frame of a general helix.

Some curves found in nature consist of multiple helices of different handedness joined together by transitions known as tendril perversions.

In music, pitch space is often modeled with helices or double helices, most often extending out of a circle such as the circle of fifths, so as to represent octave equivalency.

All content from Kiddle encyclopedia articles (including the article images and facts) can be freely used under Attribution-ShareAlike license, unless stated otherwise. Cite this article:
Helix Facts for Kids. Kiddle Encyclopedia.