Circle of fifths facts for kids

In music theory the Circle of fifths shows how the different keys are related to one another. It is usually shown as a circle with the names of keys around it. If you take any key in the circle, its fifth is the one to its right. It can be easily understood together with a piano keyboard. 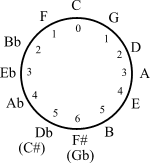 In a diagram this can be shown as a circle which is called the “Circle of Fifths”. As we get sharper and sharper we go clockwise round the circle.

The flats work in exactly the opposite way. Instead of going up to the fifth note (e.g. C,D,E,F,G) we can go down a fifth (C,B,A,G,F). F is the scale which has one flat. As we get flatter and flatter we go counter-clockwise round the circle until all seven notes are flattened.

Relative minors (the minor scale with the same key signature) can also be worked out by going round three steps of the circle (C major is the relative major of A minor, i.e. it shares the same key signature: nothing). On a keyboard the relative minor can be worked out by going down three semitones (from C go down to B, Bflat, A). 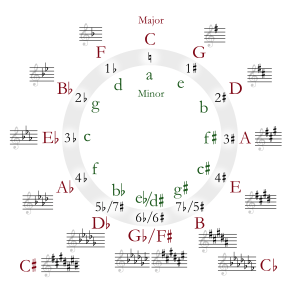 A more complex version of the circle of fifths that includes minors.

All content from Kiddle encyclopedia articles (including the article images and facts) can be freely used under Attribution-ShareAlike license, unless stated otherwise. Cite this article:
Circle of fifths Facts for Kids. Kiddle Encyclopedia.