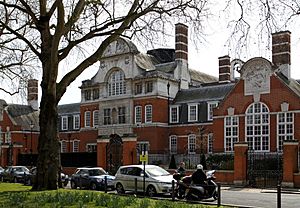 Main building of the school in Brook Green area

St Paul's Girls' School is a private secondary school for girls in Hammersmith, London. The headmistress is Clarissa Farr. It was started by the Worshipful Company of Mercers in 1904 as a female version of St Paul's School. It is one of a few schools in England that does not have a uniform, but there are strict rules about 'cleavages, thighs and midriffs'. The students are called Paulinas.

St Paul's is ranked the best secondary school in London. In 2012, 99.1% of A Level grades were A*-B. In 2013 100% of GCSE results were A*-B (as in the four previous years) and 91.2% were A*, the highest percentage ever at the school or in the country. Famous women who were pupils there include Carol Thatcher, Rachel Weisz, Dodie Smith, Jennifer Saunders, Kitty Godfree, and Onora Sylvia O'Neill, Baroness O'Neill of Bengarve. 100% of Paulinas go on to university and 45% go to Cambridge or Oxford.

All content from Kiddle encyclopedia articles (including the article images and facts) can be freely used under Attribution-ShareAlike license, unless stated otherwise. Cite this article:
St Paul's Girls' School Facts for Kids. Kiddle Encyclopedia.