Kids Encyclopedia Facts
This page is about part of London, England. For other uses, see West London (disambiguation). 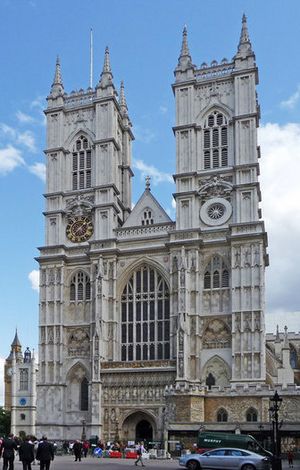 West London is the western part of London, England.

The area lies north of the River Thames and extends from its historic and commercial core of Westminster and the West End to the Greater London boundary, much of which is formed by the River Colne, including the boroughs of Brent and Harrow, making ancient Watling Street the boundary in those outer areas. The constituent districts of West London are part of the historic county of Middlesex.

The area emerged from Westminster, an area just west of the City of London, which owed its importance to the consecration of Westminster Abbey and after that, the establishment of the Palace of Westminster. Westminster and the West End are also part of Central London. The term is used to differentiate the area from the other parts of London, North London, East London and South London.

The London Plan defines two areas of London as International Centres, the West End and Knightsbridge, both in west London. Five of the thirteen Metropolitan Centres in the plan are also in West London: Ealing, Hounslow, Harrow, Uxbridge and Shepherd's Bush.

London Heathrow Airport is a major employer in West London, and the University of West London has more than 47,000 students.

All content from Kiddle encyclopedia articles (including the article images and facts) can be freely used under Attribution-ShareAlike license, unless stated otherwise. Cite this article:
West London Facts for Kids. Kiddle Encyclopedia.