The White City Stadium in the north of the area, known as the Great Stadium and seating 66000, was officially opened by King Edward VII on 27 April 1908 for the Olympics. After the Olympics, it continued to be used for athletics until 1914, and was later turned into a greyhound racing track, although it was also used for short periods by Queens Park Rangers football club, and for other sports. In 1931, a 440yd running track was installed for the Amateur Athletic Association Championships, held there from 1932 to 1970. It hosted one match during the 1966 World Cup. The stadium was demolished in 1985 to make way for the BBC White City building. Today, the 1908 Olympics are commemorated with a list of athletes inscribed on the side of the BBC Broadcast Centre Building, and the athletics finish line is marked in the paving outside the building.

The Marathon from these London Olympics played an important part in the development of the modern marathon race. In the early years of competitive international sport, the long distance marathon race did not have a standard set distance. The distance run at the first seven Olympics from 1896 to 1920 varied between 40km and 42.75 km. The starting point of the race at the 1908 Olympics was at Windsor Castle creating a distance of 26 miles 385 yards (42.195 km) to the finishing line at White City stadium. In 1921 this was adopted as the standard distance.

To house the growing population of Shepherd's Bush, a five-storey housing estate was built in the late 1930s, which also took the name of the White City. Streets were named after countries that had featured in the exhibitions.

Westfield Group (with Hausinvest Europa) has built a new shopping centre, bounded by the West Cross Route (A3220, formerly the M41 motorway), the Westway (A40) and Wood Lane (A219). This centre has been branded "Westfield London".

Two stations were built to serve the centre close to the sites of closed former London Underground stations:

In 2007, it was announced that the BBC would sell its landmark Television Centre as part of a cost-cutting programme.

In 2008 English Heritage announced its recommendation to list parts of TV centre as an excellent example of 20th-century architecture.

Pete Townshend, of The Who and former resident of Shepherd's Bush, released a solo album entitled White City: A Novel in November 1985 on Atco. The title refers to a story which accompanies the album and which takes place in the London area of White City.

The Pogues made a song about the stadium and its demolition, called "White City". It can be found on their 1989 album Peace and Love.

North of the Westfield shopping centre itself, the grade II listed Dimco Buildings (1898), now refurbished as a bus depot were used as the location for the ‘Acme Factory’ in the 1988 film Who Framed Roger Rabbit?. 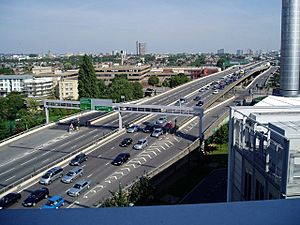 Imperial College London purchased the BBC Woodlands site for 28 million pounds in 2009 and demolished it the following year. Sections of this second major campus started opening in most notably an "innovation hub" for the college, including research facilities and commercialisation space, as well as postgraduate accommodation. The chemistry department moved much of its research to the new Molecular Sciences Research Hub on the campus in 2018, with further departments and industry partners moving to the campus and surrounding area over the coming years. The campus is also home to the Invention Rooms, a college hackerspace and community outreach centre.

Two stations were built to serve the centre close to the sites of closed former London Underground stations:

All content from Kiddle encyclopedia articles (including the article images and facts) can be freely used under Attribution-ShareAlike license, unless stated otherwise. Cite this article:
White City, London Facts for Kids. Kiddle Encyclopedia.