Harlesden is a district in the London Borough of Brent, North West London.

Located north of the Grand Union Canal and Wormwood Scrubs, the Harrow Road flows through the centre of the area which goes eastwards to Central London and west towards Wembley. Harlesden was historically in the Municipal Borough of Willesden before the creation of Brent; it lies within Willesden's postal district of NW10. Harlesden has been praised for its vibrant Caribbean culture and unofficially named London's reggae capital for its contributions to the musical genre. The town centre contains a large number of multicultural independent businesses, while industry exists by the canal, most notably a McVitie's biscuit factory that has been operating since 1902. The population includes people of Afro-Caribbean heritage most notably, as well as Irish, Portuguese, Brazilian, Somali, and smaller Latin American and East African groups within the community.

In the 19th century, Harlesden, then a rural village, began to develop some of its urban appearance with the arrival of the railways. Willesden Junction, Kensal Green and Harlesden stations all had an effect on the developing village. Cottages for railway and industrial workers were built, as was grander housing for the local middle class.

Harlesden increasingly lost its rural nature, with factories replacing farms and woodland. From late Victorian times until the 1930s, housing completed its spread across the area, and Harlesden became part of the London conurbation. Mainly after World War I, one of Europe's biggest industrial estates was constructed at nearby Park Royal, and large factories there included McVitie & Price (later United Biscuits) from 1910, and Heinz from 1919.

The image of Harlesden today began to take shape in the 1950s, 1960s and 1970s. Continued immigration from Ireland and new immigration from the Caribbean, the Indian sub-continent and Africa changed the racial and cultural make up of the area. More recently the area has now become home to Brazilian and Portuguese communities. Much of the housing is made up of Victorian terraces which have been attracting buyers unable to afford similar properties in nearby Kensal Green and Queen's Park.

During the nationwide riots of 2011, some shops in Harlesden were attacked by looters.

On 15 May 2016, a route 18 bus lost control and crashed onto a shop in the town centre at two in the afternoon. 17 people, including three children, were injured. 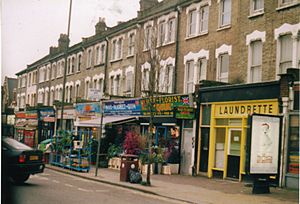 The 2011 census results for Harlesden ward counted a population of 17,162. In 2011, 71.4% of homes were apartments across the ward, 15.8% of homes were terraced houses, 8.6% semi-detached houses and 4% detached houses; with 0.1% of the homes mobile or temporary structures. Most of the terraces are pre-1920s and the flats converted from them. Many of the flats date to after 2000. Non-mixed use terraces and private sector built apartments are the main housing types that attract high prices from private sector owner-occupiers unable to afford similar properties in nearby Kensal Green and Queen's Park.

Harlesden is ethnically diverse. 67% of the population identified themselves as being BAME (Black, Asian and minority Ethnic) at the 2011 census in the Harlesden ward. Ethnically, 19% of the population was Black Caribbean, followed by 19% Black African (both including those of mixed heritage), 15% Other White, and 14% White British. The main spoken foreign languages were Portuguese and Somali.

All content from Kiddle encyclopedia articles (including the article images and facts) can be freely used under Attribution-ShareAlike license, unless stated otherwise. Cite this article:
Harlesden Facts for Kids. Kiddle Encyclopedia.