Stonebridge is an area of northwest London, England in the London Borough of Brent, and forms the western part of Harlesden. It is also the name of the largest electoral ward in the borough, which includes Stonebridge itself as well as Park Royal, Brent Park and the St Raphael's Estate. It is the most populated ward in Brent with a population over 17,000 with the majority of Afro-Caribbean heritage.

The area was named after a stone bridge built (built in the later 17th century, when most bridges were of wood) over the River Brent to the north.

The exclusive Craven Park Estate of large houses was built in the 1860s and later, roughly at the same time as the Midland Railway constructed the Dudding Hill Line (now a freight line), which gave its new residents access to central London. However, the passenger service on the line closed for a second and final time in 1902, but only after a sustained protest campaign by local people.

Although other high-quality housing had grown up around the now-closed nearby Harlesden (Midland) railway station, the area failed to consolidate as an up-market suburb, because of the general expansion of London, increasing industry, and the building of low-quality, cheap housing, in the late nineteenth century. Sub-division of many of the large houses was carried out and Stonebridge became a low-income area, which continued after high-rise comprehensive redevelopment, mostly built in a single architectural style and called the 'Stonebridge Estate', in the 1960s and 1970s.

Some parts of Stonebridge have always been in private ownership, and not been part of the Stonebridge Estate. 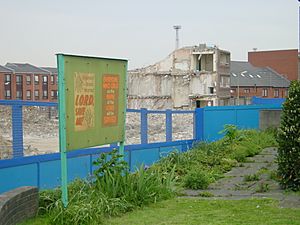 Some improvements in the street scene happened in the early 1990s, as a result of the 'Harlesden City Challenge' award of government money to the area, which was by now regarded as one of the most troubled parts of London.

Most improvements, however, came after 2000, when comprehensive redevelopment of the 1960s and 1970s housing started. This is mainly complete by 2010, although some empty high-rise buildings were still being demolished.

A traditional street layout has been introduced, largely of two- and three-storey houses, often with four-story flats around street junctions.

It responded with various training and leisure initiatives, and modern, low-rise houses with some four-storey blocks of flats, mainly on street corners to give variety to the street scene.

In 2008, the redevelopment was awarded the European Urban and Regional Planning Award, under the category Public Participation in Planning, for the exemplary approach to public participation.

The Housing Action Trust was dissolved in 2007, and housing is now a mixture of housing association ownership (Hillside Housing Trust, part of the Hyde Group) and reversion to the London Borough of Brent. Tenants were given a choice about which ownership they preferred. 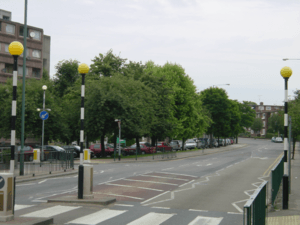 Winchlesea Road, Stonebridge. The trees on the left have been protected by a Tree Preservation Order

New development on Hillside, part of the A404 Harrow Road through the area, includes private ownership of flats above offices, and a health centre. Redevelopment has gone hand-in-hand with training and sports initiatives for local people.

A tree preservation order has been adopted by Brent Council on Winchelsea Road nearby, to protect the street scene, forcing new buildings to be set back from the road. The "exemplary approach to public participation" award quoted above may well have been justified regarding estate residents, but there were local media claims in 2007 that it was not true regarding neighbours, as evidenced by Brent Council's willingness to protect the Winchelsea Road trees.

The North and West London Light Railway has been proposed for the area.

All content from Kiddle encyclopedia articles (including the article images and facts) can be freely used under Attribution-ShareAlike license, unless stated otherwise. Cite this article:
Stonebridge, London Facts for Kids. Kiddle Encyclopedia.