Park Royal business park contains over 1,200 businesses, employing an estimated 35,000 workers. Approximately 500 food companies operate at Park Royal, employing more than 14,000 people. One third of all the food consumed in London is produced by businesses in Park Royal. Park Royal is also home to areas of residential housing and amenities serving them.

To the north of Park Royal is Harlesden in the northeast, West Twyford, an outlying area of Ealing, in the northwest, and a Network Rail depot at Stonebridge Park in the far north, which also has London Underground Bakerloo line tracks running through it (and Harlesden station nearby). On the eastern side, Park Royal is bounded by Acton Lane and Park Royal Road (B4492). The Central Middlesex Hospital is located here.

On the southern side is the arterial Western Avenue (A40), which leads to the Hanger Lane Gyratory System, as well as the Royale Leisure Park, which contains a cinema, restaurants, arcade and a bowling alley. There is also a B&Q superstore, Renault and Nissan Car Dealerships, a Staples Superstore and other industrial buildings comprising the southern half of Park Royal. Park Royal Underground station, on the Piccadilly line, is located just off Western Avenue. To the west of Park Royal is Hanger Hill and the North Circular Road (A406).

As well as many small industrial firms, Park Royal is the location of some large company buildings, including McVities and Heinz. The old Guinness brewery and sports ground site at the south-western extremity of the district has now been totally demolished, however the rail sidings are still in use for aggregate freight traffic supplying the Lafarge Tarmac depot. The first building erected adjacent to the new roundabout and bridge link to Western Avenue is occupied by international drinks company Diageo, owner of the Guinness brand and the redevelopment site. The Female Health Company, which manufactures Femidoms, has one of its two manufacturing plants here, too.

The Grand Union Canal runs through the middle of the Park Royal industrial estate, with pedestrian access via the towpath.

The name Park Royal derives from the short-lived showgrounds opened in 1903 by the Royal Agricultural Society as a permanent exhibition site for the society's annual show. After only three years the society sold the site, and returned to a touring format for its shows. With its road, rail and canal links, Park Royal was subsequently developed for industrial use, mainly during the 1930s.

The Guinness Brewery Park Royal during demolition, at its peak the largest and most productive brewery in the world

For many years it was a centre of engineering, with firms including Park Royal Vehicles, GKN and Landis and Gyr.

Queens Park Rangers F.C. played on two grounds in Park Royal. The first was the Horse Ring, later the site of the Guinness brewery, which had a capacity of 40,000. When the Royal Agricultural Society sold the grounds in 1907, QPR moved to the Park Royal Ground, 400 yards (370 m) south, an almost exact replica of Ayresome Park, with a capacity of 60,000. The club was forced to move out in February 1915 as the ground was taken over by the Army.

On 12 December 1908, the first ever rugby league test match between Great Britain and Australia took place at the Park Royal Ground in front of 2,000 fans. The match ended in a 22-all draw and was played as part of the first ever Kangaroo Tour. 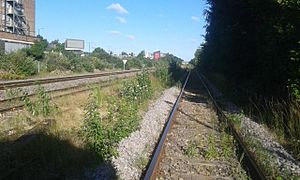 Sidings at the former Guinness Brewery

The Guinness Sports Club hosted some of the field hockey events for the 1948 Summer Olympics. 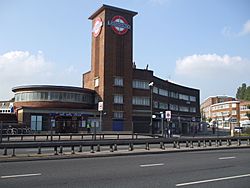 Park Royal is served by the A40 and A406 roads, and is situated close to a major interchange called the Hanger Lane gyratory.

There are currently proposals to build a Barclays Cycle Superhighway CS10 from Hyde Park to Park Royal, for completion by 2015.

Three possible new transport services have been proposed for the area: the West London Orbital, Fastbus and the North and West London Light railway.

In 2004, the multinational Diageo company agreed to build extra Central line platforms at Park Royal tube station, as part of its First Central business park, built on the site of the (now demolished) Guinness brewery. As of the beginning of 2016, this had not yet happened.

All content from Kiddle encyclopedia articles (including the article images and facts) can be freely used under Attribution-ShareAlike license, unless stated otherwise. Cite this article:
Park Royal Facts for Kids. Kiddle Encyclopedia.