North Finchley is a suburb of London in the London Borough of Barnet, situated 7 miles (11 km) north-west of Charing Cross.

North Finchley is centred on Tally Ho Corner, the junction of the roads to East Finchley, Church End, Friern Barnet and Whetstone. Church End is often known as Finchley Central, owing to the name of the tube station located there. 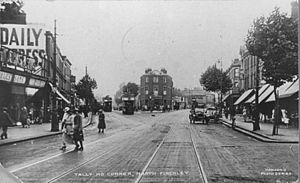 North Finchley is centred on Tally Ho Corner, the junction of the roads to East Finchley, Church End, Friern Barnet and Whetstone. Church End is often known as Finchley Central, owing to the name of the tube station located there.

It is primarily a residential and shopping area, with several supermarkets and many restaurants. The artsdepot, a local community arts centre including a gallery, a studio and a theatre, was opened on 23 October 2004 in an attempt to revitalise the area, and in order to fill a gap created by the demolition of the Gaumont cinema and what had become an open-air market.

The area has mainly 19th-century housing, ranging from quaint Victorian cottages to substantially larger Victorian double-fronted houses. There is also a dominant Edwardian style toward Woodside Park and Nether Street, but with some modern houses—probably built between the 1930s and 1960s—towards Friern Barnet. There are some mansion-style properties on Friern Barnet Lane, and a development of luxury flats at Tally Ho Corner, above the artsdepot, with views over Mill Hill and Hertfordshire. There are few local authority estates in the area; the largest one, and still pleasant, is in Woodside Park where ex-Spice Girl Emma Bunton grew up.

The new North Finchley bus station opened in 2004; however, it closed several months later owing to safety issues, after a pensioner walked into the shelter through the wrong entrance, was hit by a bus, and died. The bus station was reopened in March 2007 after safety improvements had been implemented.

The bus station is served by routes 13, 112 and 460, and by through routes 221 and 125 to Edgware and Colindale, respectively. The 'Cricketers' pub used to stand adjacent to the old bus station.

The area is served by West Finchley and Woodside Park tube stations, both on the Barnet branch of the Northern line.

On 26 July 1994 a bomb exploded outside Balfour House, a prominent building on North Finchley High Street and location of the offices of numerous Jewish charities. Earlier on the same day, a bomb had exploded outside the Israeli embassy. Two Lebanese Palestinians, Samar Alami and Jawad Botmeh, were subsequently convicted of carrying out the Finchley bombing.

Margaret Thatcher was elected as MP for Finchley in 1959; she served until her retirement from the House of Commons in 1992.

All content from Kiddle encyclopedia articles (including the article images and facts) can be freely used under Attribution-ShareAlike license, unless stated otherwise. Cite this article:
North Finchley Facts for Kids. Kiddle Encyclopedia.