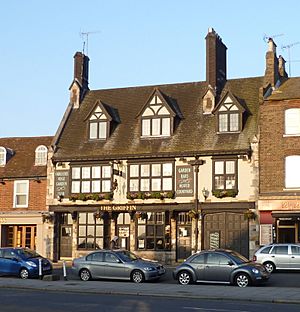 The Griffin pub with the Whetstone visible in the foreground. 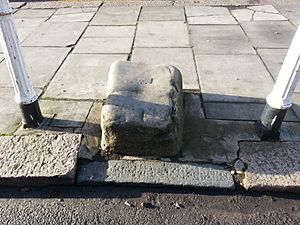 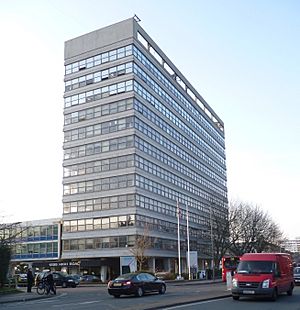 The Barnet council offices dominate the centre of Whetstone.

Whetstone /ˈwɛtstoʊn/ is a place in the London Borough of Barnet, bearing the postcode N20. It is to the east of Totteridge, and these areas are known together as Totteridge & Whetstone. This combined area is the 63rd richest area in the UK, an acclamation which can be credited to Totteridge Lane, a long road home to many multi-millionaires.

The High Road, the main road in the area, is the A1000 and part of the traditional Great North Road from London to Edinburgh.

Whetstone originated in medieval times. It was an important staging post for coaches going north from London. There has been an inn on the site of the present Griffin pub for centuries, though the present building dates from 1928. The buildings to the left of the pub (viewed from the High Road) are late 15th century.

It is thought that Whetstone was named after the whetstone used to sharpen knives and other tools, a chunk of which is located on the High Road, on the pavement outside the Griffin pub (see picture). Some was used by soldiers about to fight in the Battle of Barnet.

There were early 19th century buildings opposite the Griffin pub [1] on the corner of Totteridge Lane, but they were demolished in 2001 and replaced by a new Boots the Chemist.

Whetstone may have been the location of a Soviet spy base. Tass, the Soviet news agency, had a radio monitoring station at The Lodge, 13 Oakleigh Park North, and the British security agencies became aware that it was being used to track its activities. According to local newspapers, the diplomatic immunity granted to the Russians was a worry for the British government since it effectively granted a licence for Tass to publish libellous newsletters without the threat of prosecution.

Despite this concern, the Soviets were subsequently granted permission to use specialist radio equipment which was then used to spy on the British. The matter was escalated to Prime Minister Clement Attlee and was discussed by senior members of the cabinet, and the Russians were eventually ordered to cease their radio monitoring operation.

All content from Kiddle encyclopedia articles (including the article images and facts) can be freely used under Attribution-ShareAlike license, unless stated otherwise. Cite this article:
Whetstone, London Facts for Kids. Kiddle Encyclopedia.