The area is situated across the boundaries of three boroughs: Barnet, Enfield and Haringey. It is a sub area of Southgate due to its location in the Southgate Green ward. Much of it was once in the old borough of Southgate.

The postcode area N11 – which includes parts of Arnos Grove, Bounds Green and Friern Barnet, as well as New Southgate – is often still referred to simply as New Southgate, as in the original alphabetical listing of North London postal areas.

The area is served by New Southgate railway station and Arnos Grove tube station. It is also served by a multitude of buses in all directions, including the primary route A406 North Circular Road. A spur of Crossrail 2 is planned to terminate at New Southgate.

Much of New Southgate was once the hamlet of Betstile, a name that was resurrected in the early 20th century with Betstyle Road and later Betstyle Circus. The more southerly part of the area was known as Colney Hatch Park, but the name Colney Hatch was removed from the borough of Southgate as local residents began objecting to being associated with the famous Colney Hatch Lunatic Asylum, which lay just inside the neighbouring parish of Friern Barnet, so the name New Southgate was adopted. 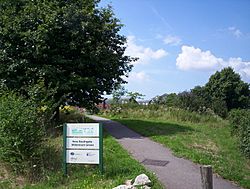 New Southgate was home to Jerome K Jerome, writer of "Three Men in a Boat". He is commemorated here with a statue of a boat and a mosaic of a dog on the New Southgate Millennium Green on Station Road.

All content from Kiddle encyclopedia articles (including the article images and facts) can be freely used under Attribution-ShareAlike license, unless stated otherwise. Cite this article:
New Southgate Facts for Kids. Kiddle Encyclopedia.