The name was recorded as far back as 1524, and is thought to be either the name of a family, or that of a house which stood on Enfield Chase. One suggestion is that it was 'the residence of the cock forester (or chief forester)'. Philip Howard, a Times columnist, characterises Cockfosters as an 'agreeable commuter suburb, whose inhabitants, like all suburbanites, consider their “village” proper country.'

Of note in Cockfosters is Trent Park, now a country park.

Christ Church, Cockfosters, an Anglican evangelical church, was founded in 1839.

The Piccadilly line of the London Underground reached Cockfosters in 1933. The Cock Inn (formerly the Cock), off Cockfosters Road on Chalk Lane, opened in 1798.

Theatre and the Arts

The Chickenshed Theatre Company, aka Chickenshed, is located in Cockfosters. It was founded in 1975 in a chicken shed and has since moved to its current site. It now produces many shows. It is an inclusive theatre company and started the concept of "inclusive theatre", which means anyone, regardless of background, race, gender, age or disability, is allowed to both watch and perform in theatre. 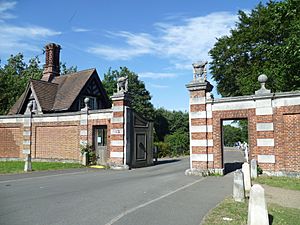 Saracens used to play at Chase Side (also known as Clocktower Park); however, they are now based in Hendon. The ground is still used for Enfield F.C. training and for the Saracens' 'B' team, Saracens Storm. It is also used as Saracens Amateurs' training ground. Cockfosters Cricket Club and Southgate Compton Cricket Club play at Chalk Lane on fields adjacent to Christ Church, either side of Cockfosters Bowling Club. 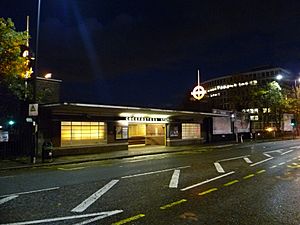 Cockfosters is the name of a 2015 short-story collection by Helen Simpson. One of the short stories features a visit to 'lost property' at Cockfosters tube station.

The MP for Southgate, David Burrowes, was born in Cockfosters. George Baillie Duncan ministered at Christ Church, Cockfosters, and the cricketer Andrew Wingfield Digby was a curate there. Cameron McVey grew up in Cockfosters. The poet John Betjeman, who taught at Heddon Court School in 1929-30, wrote "The Cricket Master" about his experiences there. Other transient residents have included the footballers Tommy Docherty and George Eastham, and Dave Davies of the Kinks. Professors John Stollery and Ian Jacobs also grew up in Cockfosters.

All content from Kiddle encyclopedia articles (including the article images and facts) can be freely used under Attribution-ShareAlike license, unless stated otherwise. Cite this article:
Cockfosters Facts for Kids. Kiddle Encyclopedia.