Botany Bay is a hamlet in Enfield, England, on the outskirts of north London, located in the historic county of Middlesex. It has a population close to 200. The hamlet is centred at the junction of The Ridgeway – the A1005 road that links Enfield to Potters Bar and the M25 motorway – and East Lodge Lane. Enfield Chase lies to the south and west. It is about a mile from the railway station at Crews Hill. 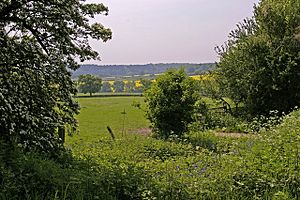 Botany Bay was established when Enfield Chase was enclosed in 1777 and was recorded as Botany Bay on C.G. Greenwood's map of 1819. According to the Dictionary of London Place Names its name references Botany Bay in Australia, transferred to the hamlet which was "remote and inaccessible in the middle of Enfield Chase." The place name is repeated in several counties within England.

Botany Bay amenities include The Robin Hood public house, a farm shop, a business centre, a cricket ground and club, and a chapel. Botany Bay is served by Transport For London bus route 313, which runs 7 days a week, linking the location to Potters Bar, Enfield and Chingford.

The hamlet is part of the Chase ward of the London Borough of Enfield, which also covers Crews Hill, Clay Hill and Bulls Cross. The 2011 census showed that 77% of the ward's population was white (64% British, 11% Other, 2% Irish), 5% was Black African and 3% Black Caribbean.

There was a small primary school in the hamlet. In the early 1950s pupils were bused from Hadley Wood to Botany Bay for their schooling.

The village has a public house, a farm with a well stocked shop and the 117 year Botany Bay Cricket Club which is housed in East Lodge Lane and shares its facilities with Botany Bay Petanque Club, Cuffley Rugby Club and is the home of the very successful Bay Jazz Club, Googlies Jazz Supper Club and Bigboppas Rock n Roll Club.

Botany Bay is part of the large Chase ward, which also covers Crews Hill, Clay Hill and Bulls Cross. The 2011 census showed that 77% of the ward's population was white (64% British, 11% Other, 2% Irish). 5% was Black African and 3% Black Caribbean.

All content from Kiddle encyclopedia articles (including the article images and facts) can be freely used under Attribution-ShareAlike license, unless stated otherwise. Cite this article:
Botany Bay, London Facts for Kids. Kiddle Encyclopedia.