The London Borough of Enfield is a London borough in north London with some districts within the borough straddling north-east London, England. It borders the London Boroughs of Barnet (to the west), Haringey (to the south) and Waltham Forest (to the south-east), the districts of Hertsmere (to the north-west), Welwyn Hatfield and Broxbourne (both to the north) in Hertfordshire, and Epping Forest (to the east) in Essex. The local authority is Enfield Council.

Enfield was recorded in Domesday Book in 1086 as Enefelde, and as Einefeld in 1214, Enfeld in 1293, and Enfild in 1564: that is 'open land of a man called Ēana', or 'where lambs are reared', from the Old English feld with an Old English personal name or with Old English ēan 'lamb'. The feld would have been a reference to an area cleared of trees within woodland that would later become known as Enfield Chase.

Enfield Town used to be a small market town in the county of Middlesex on the edge of the forest about a day's walk north of London. As London grew, Enfield Town and its surrounds eventually became a residential suburb, with fast transport links into central London.

In Roman times, Enfield was connected to Londinium by Ermine Street, the great Roman road which stretched all the way up to York. Artefacts found in the early 1900s reveal that there were Roman settlements in the areas that are now Edmonton and Bush Hill Park.

In 790 King Offa of Mercia was recorded as giving the lands of Edmonton to St Albans Abbey. The area became strategically important as East Anglia was taken over by the Danes. In the 790s strongholds were built by men loyal to King Alfred the Great, in order to keep the Danes to the east of the River Lea.

After the Norman Conquest, both Enfield and Edmonton were mentioned in Domesday Book. Both had churches, and Enfield had 400 inhabitants, Edmonton 300. Enfield is also described as having a "parc". This parc—a heavily forested area for hunting—was key to Enfield's existence in the Middle Ages (see Enfield Old Park). Wealthy Londoners came to Enfield first to hunt, and then to build houses in the green, wooded surroundings. In 1303, Edward I of England granted Enfield a charter to hold a weekly market, which has continued up to this day. The old market cross was removed in the early 20th century to make way for a monument to the coronation of King Edward VII, but was preserved by the horticulturalist E. A. Bowles for his garden at nearby Myddelton House, where it remains today.

Enfield Grammar School with its Tudor Old Hall stands next to the Enfield Town Market Place and St. Andrew's Church, the school having been extended several times since 1586. A new hall and further additions were completed shortly before World War II.

Nearby historically was the palace of Edward VI, where Elizabeth I lived while a princess, including during the final illness of Henry VIII. Edward was taken there to join her, so that in the company of his sister, Edward Seymour, 1st Earl of Hertford could break the news to Edward, formally announcing the death of their royal father in the presence chamber at Enfield, on his knees to make formal obeisance to the boy as King. Later Elizabeth held court there when she was queen (this was remembered in the name Palace Gardens that was a street running behind Pearsons department store and is still recalled in the name of Enfield's shopping centre).

Enfield has a history of armaments manufacture—see Royal Small Arms Factory. The Lee–Enfield .303 rifle was standard issue for the British Army until 1957, although its usage carried on afterwards for some time. Other firearms manufactured there include the Bren and Sten machine guns—the "en" in both cases denoting the place of manufacture.

The world's first solid state circuitry colour televisions were manufactured by Ferguson at their now closed plant in Enfield.

The first dishwasher to be mass-produced was in Hotpoint's now closed Enfield plant.

The Barclays Bank branch in Enfield was the first place in the world to have an ATM or cash machine; it was officially opened in June 1967 by Reg Varney, a television actor and personality most famous for his lead role in the comedy series On the Buses. This historical event was marked by a silver plaque on the wall of the bank, which has since been vandalised/removed and replaced with an English Heritage Blue plaque.

A fine example of a grade II listed art deco factory building can be found along Southbury Road, with the former Ripaults Factory, now an office building for Travis Perkins. 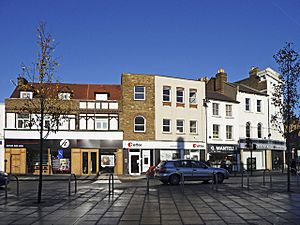 In 2007, Enfield Town centre completed a major redevelopment project under the name PalaceXchange while retaining the Palace Gardens Shopping Centre. An extension was added to the existing retail area with many new shops, and a second multi-storey car park was built along with a new road layout.

A major redevelopment of Edmonton Green including the shopping centre, and adjacent municipal housing over a wide area, started in 1999. This is still on-going, and provides new housing, health facilities, a new leisure centre, a supermarket, and many other civic features.

Many local activities are located around the A10 road, on the sites of former industrial enterprises, which has a number of large retail outlets and a large multiplex Cineworld cinema. The cinema also plays host to Jubilee Church on a Sunday morning; whilst cinemagoers continue to watch films in the other screens, a charismatic church which draws its worshippers from a wide area, hiring several auditoria for worship.

The western part of Enfield is largely residential, with shopping centres in Southgate, Palmers Green and Cockfosters.

Parts of Enfield experienced rioting in August 2011, in which a private car and a van were set alight and completely destroyed, a police car vandalised (smashed windows) and a number of shops in Enfield Town Centre (HMV, G. Mantella, Pearsons, Argos etc.) as well as others in the Enfield Retail Park being broken into and looted. The Sony Distribution Centre in the Innova Business Park, near Waltham Cross, was burnt to the ground. Although early reports questioned whether this was an arson or a coincidental incident arrests were later made in connection. In September 2012, a year after the attack, a rebuilt Sony Distribution Centre was opened by the prime minister, David Cameron.

The London Borough of Enfield has three fire stations within its boundary; Edmonton, Enfield and Southgate. However, if an incident requires a higher attendance, appliances from throughout London can be mobilised to meet the needs of the area if required. Within the Borough of Enfield lies the North Middlesex Hospital, Shell Gases Ltd (amongst other chemical plants) plus several mainline and Underground stations.

The three fire stations operate a total of five pumping appliances, one rescue tender, a command unit and a USAR unit.

Of the three fire stations within the borough; Enfield is mobilised to the most incidents and has the largest station ground (the area of which Enfield is the first appliance to attend).

The second largest playing fields are at Firs Farm on Firs Lane. There are a handful of rugby pitches along with more than a dozen football pitches. These are used by local amateur football clubs including Winchmore Hill FC, Mayfield Athletic FC and Southgate County FC. The pitches drain reasonably well but are generally in poor condition with old, rusted goalposts. The changing facilities are also very dilapidated, with some changing rooms being no more than concrete sheds with corrugated roofs.

Many sports teams and clubs are located in Enfield; Enfield Town F.C., Enfield 1893 F.C., Cockfosters F.C. and Winchmore Hill FC are the most prominent. The once successful football club, Enfield FC, were forced into a nomadic existence after the sale of their Southbury Road ground and became defunct at the end of the 2006/2007 season after years of ground sharing at many Hertfordshire based clubs. Enfield 1893 were formed after Enfield FC's demise and have spent time groundsharing at Ware FC and Broxbourne Borough FC. They finally found a ground in the borough when they merged with Brimsdown Rovers for the start of the 2011/2012 season. Saracens Rugby Football Club used to play in Enfield and still train at Bramley Road sports ground near Cockfosters. Enfield Ignatians R.F.C are currently the area's most successful Rugby club.

The principal cricket clubs in the area are Enfield, Winchmore Hill, Edmonton and Southgate, with many others playing cricket in and around the borough such as, Enfield Invicta, Mayfield CC, Myddleton House, North Enfield CC, Botany Bay and Holtwhites Trinibis CC. Many clubs play in either the Middlesex Cricket League or the Hertfordshire League. Enfield, Southgate, and Winchmore Hill have long been the area's most successful cricket clubs, regularly competing in the Middlesex Premier League. Enfield (in 1988) and Southgate (in 1977) are both past winners of the ECB National Club Cricket Championship

Futsal is also played in the area with FC Enfield playing in the FA Umbro Futsal League Southern Division.

Enfield Phoenix is the local basketball club with teams playing in the National League and the Central London League. The team play at the Edmonton Leisure Centre, Edmonton Green with seating for 400 spectators.

Theatre goers are catered for by the Intimate Theatre, the Millfield Theatre, the Dugdale Centre and the Chickenshed Theatre Company, with amateur and professional shows, dance pieces, musicals and live music on show. Amateur dramatic companies include Saint Monica's Players, The Capel Players and The London Pantomimers. Talkies Community Cinema screens British Independent and specialist films in a range of venues across the borough.

In 1840 the first section of the Northern and Eastern Railway was opened from Stratford to Broxbourne, with stations at Water Lane (Angel Road) and Ponders End. Further stations were added in 1855 at Enfield Lock (Royal Small Arms Factory) and 1884 at Brimsdown. A branch line from Water Lane to Enfield Town was opened in 1849 serving Edmonton Low Level and Enfield Town. A further station was added in 1880 at Bush Hill Park. The direct line from London to Enfield Town was opened in 1872 with stations at Silver Street and Lower Edmonton (now called Edmonton Green). In 1891, a loop from Edmonton serving Southbury (Churchbury) and Turkey Street (Forty Hill) to Cheshunt on the main line was added. The Cheshunt and Enfield Town services are currently served by London Overground.

In 1871 the Great Northern Railway opened its station on Windmill Hill. This was later replaced in 1910 when the line was extended to Cuffley. This section of railway is now part of the line commonly known as the Hertford Loop. 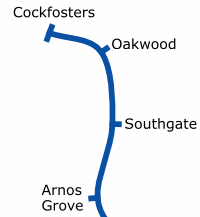 Enfield is served by the Piccadilly line of the London Underground with stations at Arnos Grove, Southgate, Oakwood (named as Enfield West when it first opened) and Cockfosters (where the line terminates). Suburban London Overground and National Rail Great Northern services also run within the borough.

There are numerous bus services throughout the borough run by Transport for London.

The main roads running through the borough include the North Circular Road, the M25, Green Lanes, the A10 and the old Hertford Road (A1010).

The borough's museums include Forty Hall and the garden exhibitions at Capel Manor, Myddleton House (part of the Lee Valley Park) and the Whitewebbs Museum of Transport. The Borough's own museum is based in Thomas Hardy House, 39 London Road.

Scouting and Guiding have many groups within Enfield. The annual St George's Day Parade has around a thousand young people marching through Enfield Town, led by the Enfield District Scout Band.

The Boys' and Girls' Brigade are also quite active within the borough, participating in various ceremonies and events throughout the year, including the Enfield Town Show, St Georges Day Parade and on Remembrance Day Parade.

Enfield is twinned with:

All content from Kiddle encyclopedia articles (including the article images and facts) can be freely used under Attribution-ShareAlike license, unless stated otherwise. Cite this article:
London Borough of Enfield Facts for Kids. Kiddle Encyclopedia.