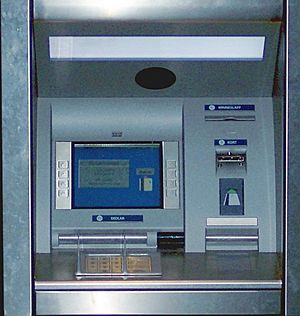 An ATM in Sweden

An Automatic Teller Machine, or ATM for short, is a machine that lets people take out (withdraw) cash from their bank accounts. In the United Kingdom (UK), ATMs are often called cash machines, cashpoints or the hole in the wall.

ATMs may be found in stores and shopping malls. Sometimes, they can be found in bars or restaurants. Other times, at special events, people may set one up so the guests can use the machine, like at a fundraiser.

People need a debit card or credit card in order to use an ATM. They will also need to have a Personal Identification Number (PIN), which is a code that lets them get into their account.

There are a number of scams with ATMs. In one scam, con artists look over the victim's shoulder and find their PIN; this is known as shoulder surfing. In another, they may install a video camera and get PIN numbers from that way. They then make cards using the PIN number and account number to be able to use that person's account.

All content from Kiddle encyclopedia articles (including the article images and facts) can be freely used under Attribution-ShareAlike license, unless stated otherwise. Cite this article:
Automated teller machine Facts for Kids. Kiddle Encyclopedia.