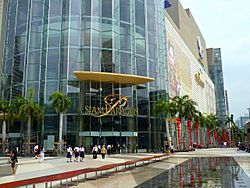 Siam Paragon is the largest shopping mall in Thailand. It opened on 9 December 2005. The mall is in Pathumwan. It covers in an area of 500,000 square kilometres (190,000 sq mi). More than 4000 cars can park in its parking lot. Siam Paragon is the first place in Thailand that have 26 glass elevators.

In addition to the stores in the mall, there are many other special locations. The mall has a multiplex movie theater. It has 15 large theaters One of the theaters has the largest screen in Asia. Also, more people can sit in that theater than any other Asian theater. Siam Ocean World (Underwater world) is an aquarium. It is the largest aquarium in South East Asia. The mall also has exhibition hall, Thai Art Gallery, an opera concert hall, a large bowling alley and a karaoke center.

There are also many different restaurants in the mall.

All content from Kiddle encyclopedia articles (including the article images and facts) can be freely used under Attribution-ShareAlike license, unless stated otherwise. Cite this article:
Siam Paragon Facts for Kids. Kiddle Encyclopedia.