The city was founded in 1973 under the New Towns Development Programme of the Hong Kong government. Its current name was named after the nearby village of Sha Tin Wai. Housing the industrial area of Fo Tan, Shatin's economy once heavily relied on manufacturing, logistics and transportation. Since the late 1990s, it has undergone an extensive transition into areas such as business, service, tourism, entertainment, culture, education, sports, technology and scientific research. This has been marked by the building of Sha Tin Racecourse, Hong Kong Sports Institute and the Hong Kong Science Park in its outskirts. 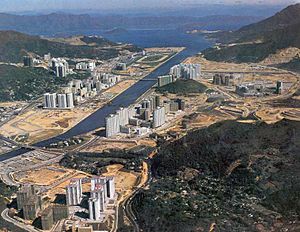 Sha Tin New Town under development in the late 1970s.

Due to their proximity to the Shenzhen border, towns in the northern parts of Hong Kong, notably Sheung Shui and Yuen Long, have become hubs for parallel traders who have been buying up large quantities of goods, forcing up local prices and disrupting the daily lives of local citizens. Since 2012, there has been an increase in mainland parallel traders arriving in the North District of Hong Kong to re-export infant formula and household products – goods popular with mainlanders – across the border to Shenzhen. The volume of smuggling activity spilled over into Tuen Mun and Sha Tin in 2014.

The first anti-parallel trading protest was started at Sheung Shui in September 2012. As government efforts to limit the adverse impact of mainland trafficking were widely seen as inadequate, so there have been further subsequent protests in towns in the North District including Sha Tin.

All content from Kiddle encyclopedia articles (including the article images and facts) can be freely used under Attribution-ShareAlike license, unless stated otherwise. Cite this article:
Sha Tin Facts for Kids. Kiddle Encyclopedia.