i/ˈslaʊ/) is a large town in Berkshire, England, 21 miles (34 km) west of London, 3 miles (5 km) north of Windsor, 6 miles (10 km) east of Maidenhead, 12 miles (19 km) south-east of High Wycombe and 20 miles (32 km) north-east of Reading. The A4 and the Great Western Main Line pass through the town, which was historically part of neighbouring Buckinghamshire. In 2011, Slough's population was the most ethnically diverse in the United Kingdom outside London. with the highest proportion of religious adherents in England.

Slough is home to the Slough Trading Estate, the largest industrial estate in single private ownership in Europe. Blackberry, McAfee, Burger King and LEGO have head offices in the town. The Slough Trading Estate provides over 17,000 jobs in 400 businesses. The town is approximately 9.1 miles (14.6 km) to the west of Heathrow Airport.

The Brunel bus station and car park, opened in 1975 has now been completely demolished as work has started on the Heart of Slough project.

The name, which means "soil", was first recorded in 1195 as Slo. It first seems to have applied to a hamlet between Upton to the east and Chalvey to the west, roughly around the "Crown Crossroads" where the road to Windsor (now the A332) met the Great West Road. The Domesday Survey of 1086 refers to Upton, and a wood for 200 pigs, worth £15. During the 13th century, King Henry III had a palace at Cippenham. Parts of Upton Court were built in 1325, while St Mary the Virgin Church in Langley was probably built in the late 11th or early 12th century, though it has been rebuilt and enlarged several times.

From the mid-17th century, stagecoaches began to pass through Slough and Salt Hill, which became locations for the second stage to change horses on the journey out from London. By 1838 and the opening of the Great Western Railway, Upton-cum-Chalvey's parish population had reached 1,502. In 1849, a branch line was completed from Slough railway station to Windsor and Eton Central railway station, opposite Windsor Castle, for the Queen's convenience.

Slough has 96 listed buildings. There are

1918 saw a large area of agricultural land to the west of Slough developed as an army motor repair depot, used to store and repair huge numbers of motor vehicles coming back from the battlefields of the First World War in Flanders. In April 1920, the Government sold the site and its contents to the Slough Trading Co. Ltd. Repair of ex-army vehicles continued until 1925, when the Slough Trading Company Act was passed allowing the company (renamed Slough Estates Ltd) to establish an industrial estate. Spectacular growth and employment ensued, with Slough attracting workers from many parts of the UK and abroad.

During the Second World War, Slough experienced a series of air raids, mostly in October 1940 (the largest number of people, five, dying as a result of one on the 13th), and an emergency hospital treating casualties from London was set up in Slough. Local air raid deaths and deaths at the hospital account for the 23 civilian lives recorded lost in the borough area. 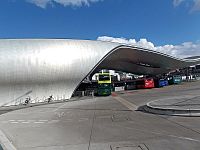 In the 21st century, Slough has seen major redevelopment of the town centre. Old buildings are being replaced with new offices and shopping complexes. Tesco has replaced an existing superstore with a larger Tesco Extra. The Heart of Slough Project is a plan for the large-scale redevelopment of the town centre as a focus and cultural quarter for the creative media, information and communications industries. It will create a mixed-use complex, multi-functional buildings, visual landmarks and a public space in the Thames Valley. Recommendations for the £400 million project have been approved, and planning approval was given by Slough Borough Council's planning committee on 9 July 2009. Work began in 2010 for completion in 2018.

In December 2009, two key components of the project were signed: the Homes and Communities Agency (HCA) signed its agreement to provide £11m of funding for infrastructure and Thames Valley University (TVU) courses which are due to remain in the town have found a new home at the Centre in Farnham Road, Slough. In parallel to the town centre redevelopment plan, SEGRO (owner of the Slough Trading Estate) plans to spend £600 million over the next 20 years on the trading estate. This is intended to create environmentally sustainable buildings, open green spaces, two hotels, a conference centre, cafés, restaurants and better transport facilities to improve links to Slough town centre and the surrounding residential areas. It is claimed that the plan will create more than 4,100 new jobs and contribute around £100m a year to Slough's economy. If both plans go ahead in their current forms, nearly £1 billion will be spent on redeveloping Slough over the next 20 years.

Herschel Park (known as Upton Park until 1949), named for astronomer William Herschel, is currently being relandscaped in a multimillion-pound effort to bring it back to its former Victorian era glory. The park was featured in an episode of the documentary programme Who Do You Think You Are? focusing on the TV presenter Davina McCall.

In 2010, £2 million was set aside to improve disabled access to Slough railway station in preparation for an expected increase in use during the 2012 London Olympics. Preparations were under way for the regeneration of the Britwell suburb of Slough, involving tearing down a dilapidated block of flats and the closing of the public house the Jolly Londoner in Wentworth Avenue and replacing them with new homes, as well as relocating the shopping parade in the street to nearby Kennedy Park. As part of the Heart of Slough project, construction work on a new bus station began in March 2010 following weeks of demolition work to half of the existing bus station and the removal of Compair House near the railway station; it was expected to be completed by January 2011 and was opened in May 2011, 5 months behind schedule.

Redevelopment on this scale has been strongly criticised by conservation groups. The Twentieth Century Society has stated that

"[A] tragically high quantity of good buildings have been demolished in Slough in recent years, including grand Art-Deco-styled factories by the likes of Wallis Gilbert and high-quality post-war offices. More are to come down as the town tries to erase its past and reinvent itself from scratch. Despite famously heckling Slough, John Betjeman's praise for the town hall's architecture as 'a striving for unity out of chaos' in 1948 has never been so relevant as today. C20 believes that the redevelopment of the town hall would be an act of vandalism to the civic centre and is supporting the Campaign to Save Slough's Heritage in their request for a review of the decision."

During November 2016, the Slough Queensmere and Observatory shopping centres were sold to Abu Dhabi Investment Authority (ADIA) in a deal worth £130million.

Slough is to the west of Greater London. Nearby towns are Windsor to the south, Maidenhead to the west, Uxbridge to the northeast and Beaconsfield to the north.

Most of the area that now makes up Slough was anciently part of Buckinghamshire. The town developed by the expansion and amalgamation of villages along the Great West Road. Over the years Slough has expanded greatly, incorporating a number of different villages. Original villages that are now suburbs of Slough include Chalvey, Cippenham, Colnbrook, Langley, Poyle, Upton, and Wexham.

Named neighbourhoods include Brands Hill, Britwell, Huntercombe, Manor Park, Salt Hill, Upton Lea and Windsor Meadows. The urban area merges into the neighbouring parishes of Burnham, a small area of Taplow near Cippenham, Farnham Royal and Stoke Poges which remain in the county of Buckinghamshire and Datchet which is also in Berkshire. Eton is narrowly buffered by the Jubilee River and by green space (mainly the college playing fields) from part of Slough, and the two areas formerly formed the Eton birth, marriages and deaths registration district.

The nearest Met Office weather observing station to Slough is London Heathrow Airport, about 5 miles (8 km) east of Slough town centre. This part of the Thames Valley is notable for generally having the warmest daytime summer temperatures on average in the British Isles. 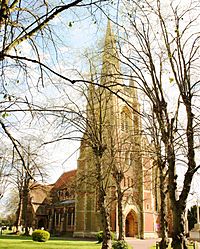 During the Great Depression of the 1930s, Slough became a haven for the unemployed Welsh, who walked up the Great West Road looking for employment.

In the early 1950s, there were a number of Polish refugee camps scattered around the Slough area. As returning to Poland (then in the Soviet Bloc) was not considered an option by many of the wartime refugees, many Polish families decided to settle in Slough, an expanding town seeking committed workers and offering a chance to own homes for those prepared to work hard. In time, a Polish-speaking Roman Catholic parish was established with its own church building. A new wave of Polish migration to Slough has followed since Poland became part of the European Union.

Figures from the 2011 census showed that 41.2% of Slough's population identified as Christian, 23.3% as Muslim, 10.6% as Sikh, 6.2% as Hindu, 0.5% as Buddhist, 0.1% as Jewish, 0.3% as having other religions, 12.1% as having no religion and 5.7% did not answer the question. Slough has the highest percentage of Sikh residents in the country according to the census figures. Slough also has the highest percentage of Muslim and Hindu residents in the South East region. 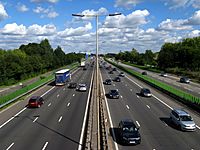 The M4 Motorway between Junctions 6 and 7 (facing London). 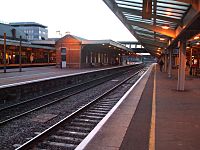 A First Mercedes-Benz Citaro in the blue "Heathrow 7 Series" livery operates between Maidenhead, Cippenham, Windsor and Slough to Heathrow Airport.

The Cycle To Hire scheme was launched in Slough in late 2013.

Slough is near London, Heathrow Airport, Uxbridge, Maidenhead and Staines and the town is a travel hub. Many people from Slough work in nearby towns and cities such as Windsor, Reading, London and Bracknell, and there are large passenger movements in the morning and evening rush hours. Road transport in Slough includes:

Reading: First Great Western operate services to Reading every half an hour which take 20 minutes.

Slough will have Crossrail services, a new railway line across central London, under construction. The Windsor Link Railway is another proposed railway line that would link Slough to Heathrow Terminal 5 via Wraysbury, Datchet, Windsor and Chalvey. The Western Rail Access to Heathrow, WRAtH, is a £500m rail project announced by the DfT. The proposed rail link would directly serve Slough with four trains every hour - reducing travel times from 45 to six minutes. It is expected to be operational by 2021. In February 2014, Network Rail announced the route for the project. The WRAtH project is expected to generate more than £2billion in economic benefits to the UK as well as 40,000 new jobs.

National Cycle Network route 61 runs through central Slough. A Smoove bike sharing system was launched in October 2013, mainly focused on meeting the need of enabling workers at businesses operating from the town’s trading estate to easily get to and from their places of employment from local railway stations.

Observatory House was given its name because it is the site where astronomer William Herschel lived, and erected his great 40-foot telescope.

Crossbow House features in the opening sequences and some of the filming for popular BBC comedy "The Office".

Come, friendly bombs and fall on Slough
It isn't fit for humans now
There isn't grass to graze a cow.
Swarm over, death!

The poem was written two years before the outbreak of the Second World War, in which Britain (including Slough itself) experienced bombing from enemy air raids. However, on the centenary of the poet's birth, the daughter of the poet apologised for the poem. Candida Lycett-Green said her father "regretted having ever written it". During her visit, Mrs Lycett-Green presented Mayor of Slough David MacIsaac with a book of her father's poems. In it was written: "We love Slough".

All content from Kiddle encyclopedia articles (including the article images and facts) can be freely used under Attribution-ShareAlike license, unless stated otherwise. Cite this article:
Slough Facts for Kids. Kiddle Encyclopedia.