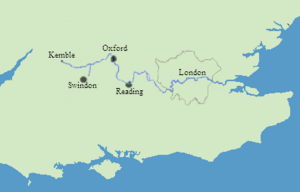 The course of the River Thames.

The Thames Valley Region is a term that is used for the English counties and towns along the course of the River Thames. It includes parts of Wiltshire, Oxfordshire, Buckinghamshire, Berkshire, North Hampshire and West London.

The Thames Valley region is one of the wealthiest regions in the European Union It has good communications, a well educated work force, is near to London, and has strong local employers.

In the twentieth century, new industries replaced the old ones. That were primarily information and communications technology and life sciences.

The Thames Valley region is an important tourist destination in the United Kingdom, both for domestic and international tourists. Some major attractions include:

All content from Kiddle encyclopedia articles (including the article images and facts) can be freely used under Attribution-ShareAlike license, unless stated otherwise. Cite this article:
Thames Valley Facts for Kids. Kiddle Encyclopedia.