Thunderbirds is a British science-fiction television series created by Gerry and Sylvia Anderson, filmed by their production company AP Films (APF) and distributed by ITC Entertainment. It was made between 1964 and 1966 using a form of electronic marionette puppetry (dubbed "Supermarionation") combined with scale-model special effects sequences. Two series, totalling 32 fifty-minute episodes, were filmed; production ended with the completion of the sixth episode of the second series after Lew Grade, the Andersons' financial backer, failed in his bid to sell the programme to American network television.

Set in the 2060s, Thunderbirds is a follow-up to the earlier Supermarionation productions Four Feather Falls, Supercar, Fireball XL5 and Stingray. It follows the exploits of International Rescue (IR), a life-saving organisation equipped with technologically-advanced land, sea, air and space rescue craft; these are headed by a fleet of five vehicles named the Thunderbirds and launched from IR's secret base in the Pacific Ocean. The main characters are ex-astronaut Jeff Tracy, the founder of IR, and his five adult sons, who pilot the Thunderbird machines.

Thunderbirds began its first UK run in 1965 on the ITV network. It was also broadcast in around 30 other countries during the 1960s. Periodically repeated, it was adapted for radio in the early 1990s and has influenced many TV programmes and other media. As well as inspiring various merchandising campaigns, the series has been followed by two feature-length film sequels, a 2004 live-action film and a mimed stage show. The second of two TV remakes, Thunderbirds Are Go, premiered in 2015; the same year, three new episodes, based on soundtracks of tie-in audio plays and produced using the same techniques as the original series, were produced in celebration of the franchise's 50th anniversary.

Widely regarded as the Andersons' most popular and commercially successful series, Thunderbirds has been praised for its special effects (directed by Derek Meddings) and musical score (composed by Barry Gray). It is also remembered for its title sequence, which begins with an oft-quoted countdown by Jeff Tracy voice actor Peter Dyneley: "5, 4, 3, 2, 1: Thunderbirds Are Go!" A real-life rescue service, the International Rescue Corps, is named after the organisation featured in the series.

Set between 2065 and 2067, Thunderbirds follows the exploits of the Tracy family, headed by American industrialist and ex-astronaut Jeff Tracy. Jeff is a widower with five adult sons: Scott, John, Virgil, Gordon and Alan. The Tracys make up International Rescue (IR), a secret organisation founded to save human life. They are aided in this mission by technologically-advanced land, sea, air and space vehicles that are called into service when conventional rescue methods prove ineffective. The most important of these vehicles are the five "Thunderbird machines", each assigned to one of the five Tracy brothers:

The family live on Tracy Island, IR's base in the South Pacific Ocean, in a luxurious villa that they share with four others: Jeff's mother, Grandma Tracy; the scientist and engineer Brains, who designed the Thunderbirds machines; Brains' assistant Tin-Tin, who is also Alan's girlfriend; and Tin-Tin's father Kyrano, who serves as Jeff's retainer. In this remote location, IR is safe from spies and criminals who envy the organisation's technology and try to acquire the technological secrets of the Thunderbird machines.

Some of IR's missions are brought about by sabotage or negligence rather than mere accidents. For missions requiring investigation or espionage, the organisation incorporates a network of undercover agents headed by English aristocrat Lady Penelope Creighton-Ward and her butler Aloysius Parker. Based at Creighton-Ward Mansion in Kent, Penelope and Parker travel in FAB 1, a specially-modified Rolls-Royce. Members of IR acknowledge orders with the expression "FAB" (a shortening of the 1960s vogue word "fabulous", but spoken like an initialism: "F-A-B").

IR's most persistent opponent is master criminal the Hood. Based in a temple in the Malaysian jungle and possessing powers of hypnosis and dark magic, the Hood exerts a telepathic control over Kyrano, his estranged half-brother, and manipulates the Tracys into rescues that unfold according to his own malevolent designs. This gives him opportunities to spy on the Thunderbird machines and, by selling their secrets, make himself rich.

More than 3,000 Thunderbirds-themed products have been marketed since the series' debut. To accommodate the high demand for tie-ins, APF established three dedicated subsidiaries: AP Films Merchandising, AP Films Music and AP Films Toys. Some British commentators dubbed the 1966 end-of-year shopping season "Thunderbirds Christmas" due to the series' popularity. In the early 1990s, Matchbox launched a new toy range to coincide with the BBC 2 repeats. Sales figures for Christmas 1992 exceeded those achieved by the Star Wars merchandising campaigns of the 1970s and 1980s. Demand for Matchbox's Tracy Island Playset overwhelmed supply, resulting in shop fights and a substantial black market for the toy.

A comic strip featuring the characters of Lady Penelope and Parker debuted in the early issues of APF Publishing's children's title TV Century 21 (co-published with City Magazines) in 1965. A full-length Thunderbirds strip appeared a year later, at which point the Lady Penelope adventures were given their own comic. The Thunderbirds strip ran in TV Century 21 (later renamed TV21) from 15 Jan. 1966 to 13 June 1970; it was originally by Alan Fennell & Frank Bellamy; later contributors included Scott Goodall, Don Harley, and John Cooper. The Thunderbirds strip was reprinted in Polystyle Publications' Countdown comic in 1971–1972.

Thunderbirds, Lady Penelope, and Captain Scarlet and Thunderbirds annuals were published in the late 1960s; during the same period, eight original novels were written. In 2008, FTL Publications of Minnesota launched a new series of tie-in novels.

Between 1965 and 1967, APF Records released 19 audio episodes in the form of vinyl EPs. Three are original stories; the rest are adapted from TV episode soundtracks, with additional narration provided by a member of the voice cast. The series' first video game tie-in, developed for the Commodore 64 and ZX Spectrum computers, was released by Firebird Software in 1985. Other titles have since been released for the Game Boy Color, Game Boy Advance and PlayStation 2. During the late 1980s, the series was issued on home video for the first time by PolyGram and its subsidiary Channel 5. Following its acquisition by Carlton International Media in 1999, Thunderbirds was digitally remastered for the release of the first DVD versions in 2000. Blu-ray Disc editions followed in 2008.

An official Thunderbirds board game was published in 2015. Its designer is Matt Leacock (designer of the Pandemic boardgame). Three expansions for the core game were published in 2016: Above & Beyond, The Hood, and Tracy Island. 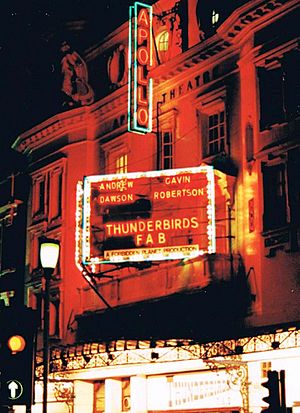 Billboard for the 1989 production of the stage show tribute Thunderbirds: F.A.B. at London's Apollo Theatre
For more details, see Works based on Thunderbirds#References, parodies and imitations

Thunderbirds has influenced TV programmes, films and various other media. The puppet comedy of the film Team America: World Police was directly inspired by the idiosyncrasies of Thunderbirds-era Supermarionation techniques. Allusion and homage are also evident in Wallace and Gromit: A Close Shave, Austin Powers: The Spy Who Shagged Me and Spaced, as well as the character design of Star Wars: The Clone Wars. The BBC sketch comedy Not Only... But Also included a segment titled "Superthunderstingcar"—a parody of Thunderbirds, Supercar and Stingray.

IR's life-saving mission inspired the founding of the volunteer International Rescue Corps, originally made up of a group of British firemen who contributed to the humanitarian effort following the 1980 Irpinia earthquake. Virgin Group used the series in branding its services: Virgin Atlantic operated a Boeing 747-400 airliner named Lady Penelope from 1994 until 2015, while Virgin Trains West Coast operated 16 Class 57 locomotives that were all named after main characters and vehicles to rescue broken-down trains from 2002 until 2012.

Cover versions of "The Thunderbirds March" have been released by musicians and bands such as Billy Cotton, Joe Loss, Frank Sidebottom, The Rezillos and The Shadows. Groups who have written songs inspired by the series include Fuzzbox (with "International Rescue"), TISM (with "Thunderbirds Are Coming Out"), Busted (with "Thunderbirds / 3AM") and V6 (with "Thunderbirds – Your Voice"). In 1991, Anderson filmed the music video for the Dire Straits single "Calling Elvis" with a collection of Thunderbirds-style puppets.

During the 1960s, APF produced themed TV advertisements for Lyons Maid and Kellogg's. Aspects of Thunderbirds have since been used in advertising for Swinton Insurance, Nestlé Kit Kat, Specsavers and the UK Driver and Vehicle Licensing Agency.

The first annual "International Thunderbirds Day" was celebrated on 30 September 2017, the 52nd anniversary of the series' TV debut. To mark the event, Vue Cinemas hosted special Thunderbirds screenings in 52 locations around the country.

All content from Kiddle encyclopedia articles (including the article images and facts) can be freely used under Attribution-ShareAlike license, unless stated otherwise. Cite this article:
Thunderbirds (TV series) Facts for Kids. Kiddle Encyclopedia.