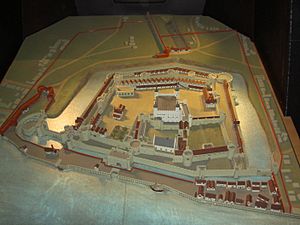 A scale model of the Tower of London. This model can be found inside the tower. 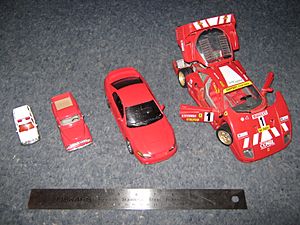 A scale model is most generally a physical representation of an object that maintains accurate relationships between all important aspects of the model, although absolute values of the original properties need not be preserved. This enables it to demonstrate some behavior or property of the original object without examining the original object itself. The most familiar scale models represent the physical appearance of an object in miniature, but there are many other kinds.

Scale models are used in many fields including engineering, architecture, film making, military command, salesmanship, and hobby model building. While each field may use a scale model for a different purpose, all scale models are based on the same principles and must meet the same general requirements to be functional. The detail requirements vary depending on the needs of the modeler.

All content from Kiddle encyclopedia articles (including the article images and facts) can be freely used under Attribution-ShareAlike license, unless stated otherwise. Cite this article:
Scale model Facts for Kids. Kiddle Encyclopedia.