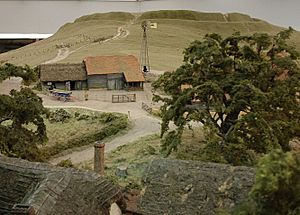 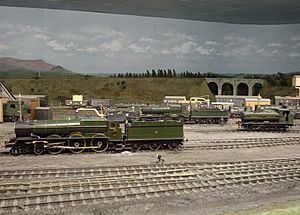 Engine shed on the Dartmoor scene 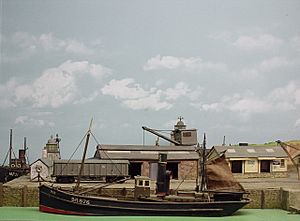 Pendon Museum, located in Long Wittenham near Didcot, Oxfordshire, England, is a museum that displays scale models, in particular a large scene representing parts of the Vale of White Horse in the 1920s and 1930s. The scene, under construction since the 1950s and with parts dating back earlier, was inspired by detailed research into the architecture and landscape of the vale, with some models of cottages taking hundreds of hours to complete. It was founded by the late Roye England, (an anglophile Australian who lived in England), and run jointly by the late English Model Maker, Guy Williams, (who made fifty-seven of the museum's ninety locomotives). They can be seen working together in the 1958 British Pathé short, 'Hair Thatching'. The museum is run by a group of volunteers and is open to the public most weekends and holidays, except during the winter.

The museum was founded by the artist and craftsman Roye England, who was interested in model railways. He observed the destruction and modification of many historic buildings in the area and began to make model representations of them.

Both the main Vale scene and others display working scale model railway scale models of typical scenes on the Great Western Railway (GWR) of the 1920s. The trains are also representative in detail of those travelling that line in those years.

It is not a 'model railway layout' in its usual sense as the trains run at scale speed with a realistic interval between each.

The main display and ongoing project at Pendon is a scale representation of the Vale of White Horse as it was in the inter-war period. The scene is centred on the 'typical' village of Pendon Parva, which is served by a railway station on the main London to Bristol GWR main line that runs through the Vale, and another on the M&SWJR that became one of the constituent companies of the GWR in 1923. The topography and the village layout is fictional, but every building and significant feature is an exact model of a real building from the Vale of White Horse.

Some locos on the layout:

On the ground floor of the museum, a model representing a Great Western Railway branch line on Dartmoor, originally built in 1955 to showcase the trains being built for the Vale scene, is operated for visitors. The main focus of the Dartmoor scene is a model of Brunel's timber viaduct at Walkham in Devon built by R. Guy Williams, who also built many of the model locomotives at the museum.

Locos on the layout include:

The model trains are hand built, to represent individual locomotives, carriages, and wagons as exactly possible, based on surviving records and photographs. Operation consists of a sequence of trains, showing what one could have seen passing by on a summer day and night, in the mid-1920s. This sequence is based on timetables of the period. They are all modelled in 4 mm to 1 foot scale (1:76), and run on track of 18mm gauge, a combination known as EM gauge.

All content from Kiddle encyclopedia articles (including the article images and facts) can be freely used under Attribution-ShareAlike license, unless stated otherwise. Cite this article:
Pendon Museum Facts for Kids. Kiddle Encyclopedia.