Didcot is a railway town and civil parish in the county of Oxfordshire, England, 10 miles (16 km) south of Oxford, 8 miles (13 km) east of Wantage and 15 miles (24 km) north west of Reading. Didcot is noted for its railway heritage, having been a station on Brunel's Great Western Main Line from London Paddington, opening in 1856.

Today the town is known for its railway museum and power stations, and is the gateway town to the Science Vale: three large science and technology centres in the surrounding villages of Milton (Milton Park), Culham (Culham Science Centre) and Harwell (Harwell Science and Innovation Campus which includes the Rutherford Appleton Laboratory). The town was historically part of Berkshire until 1974 when there was a boundary change. 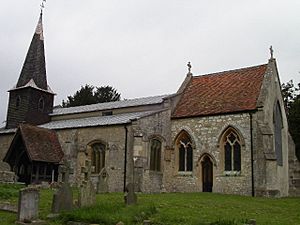 All Saints' parish church, dating to 1160

The area around present-day Didcot has been inhabited for at least 9000 years, a large scale archaeological dig between 2010–2013 produced finds from the Mesolithic, Neolithic, Iron Age and Bronze Ages. During the Roman era the inhabitants of the area tried to drain the marshland by digging ditches through what is now the Ladygrove area north of the town near Long Wittenham, evidence of which was found during surveying in 1994. A hoard of 126 gold Roman coins dating to around 160 CE was found just outside the village in 1995 by an enthusiast with a metal detector; this is now displayed at the Ashmolean Museum on loan from the British Museum.

In early historical records Didcot was recorded as Dudcote and Doudecothe amongst other similar names, deriving from the personal name Dydda and the Anglosaxon word for house or shelter, cott. The name is believed to be derived from that of Dida, a 7th-century Mercian sub-king who ruled the area around Oxford and was the father of Saint Frithuswith, now the patron saint of both Oxford and Oxford University. Didcot was then a rural Berkshire village and remained that way for centuries, only occasionally appearing in records. At the time of the Domesday Book in 1086 Didcot was much smaller than several surrounding villages, including Harwell and Long Wittenham, which are now dwarfed by modern Didcot. Didcot was not explicitly named in the Domesday Book with the closest recorded settlement being Wibalditone, with 21 inhabitants and a church, the name possibly survives in Willington's Farm on the edge of Didcot's present-day Ladygrove Estate. Parts of the original village still exist in the Lydalls Road area where the Church of England parish church of All Saints is located, the church's nave walls dates from 1160. 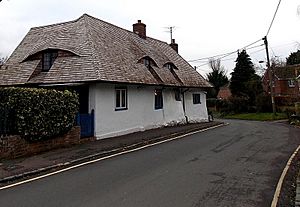 In the 1500s Didcot was a small village of landowners, tenants and tradespeople with a population of around 120. The oldest house still standing in Didcot is White Cottage, a Grade II listed wood shingle roofed, timber-framed building on Manor Road which was built in the early 16th Century. At this time the village centre consisted of a collection of small houses and surrounding farms around Manor, Foxhall and Lydalls Roads, those still standing include The Nook, Thorney Down Cottage and Manor Cottage which were all constructed in the early to mid-17th Century. Didcot village was on the route between London and Wantage (present day Wantage Road) and hosted three turnpikes (toll gates). These brought in revenue for local landowners and gentry and operated between 1752 and 1879 when they were abolished due to the growing use of the railway.

19th and 20th centuries: Introduction of the Railway 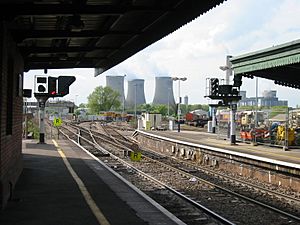 View of the Didcot Power Station in 2005 from Platform 3 of Didcot Parkway. Three of the cooling towers in the distance were demolished in July 2014.

The Great Western Railway, engineered by Isambard Kingdom Brunel, reached Didcot in 1839. In 1844 the Brunel-designed Didcot station was opened. The original station burnt down in the later part of 19th century. Although longer, a cheaper-to-build line to Bristol would have been through Abingdon farther north, but the landowner the first Lord Wantage is reputed to have prevented that alignment. Its presence and that of a junction to Oxford created the conditions for the future growth of Didcot. The station's name entrenched an orthodox spelling of Didcot.

Didcot's junction of the routes to London, Bristol, Oxford and to Southampton via the Didcot, Newbury and Southampton Railway (DN&S) made the town of strategic importance to military logistics, in particular during the First World War campaign on the Western Front and the Second World War preparations for D-Day. The DN&S line has since closed and the sites of the large Army and Royal Air Force ordnance depots that were built to serve these needs have disappeared beneath the power station and Milton Park Business Park, however the 11 Explosive Ordnance Disposal Regiment RLC is still based at the Vauxhall Barracks in the town.

Remains of the Didcot, Newbury and Southampton Railway are still in evidence in the eastern part of town. This line, designed to provide a direct link to the south coast from the Midlands and the North avoiding the convuluted Reading/Basingstoke route, was constructed from 1879–1882 after previous proposals had floundered. It was designed as a main line and was engineered by John Fowler and built by contractors T.H. Falkiner and Sir Thomas Tancred, who together also constructed the Forth Bridge. It was a very expensive line to build due to the heavy engineering challenges of crossing the Berkshire and Hampshire downs with a ruling 1 in 106 gradient to allow for higher mainline speeds, and this over-capitalisation coupled with initial traffic barely meeting expectations caused the company financial problems, meaning it never reached Southampton of its own accord but had to join the main London and South Western Railway line at Shawford, south of Winchester.

However, from the outbreak of World War II such was the growth of wartime traffic to the port of Southampton a decision was made to upgrade the line which included the complete doubling of the northern section between Didcot and Newbury, closing for 5 months in 1942/3 while this was carried out. Several of the bridges in the Didcot/Hagbourne area were also strengthened and rebuilt.

Although passenger trains between Didcot and Newbury were withdrawn in 1962, the line continued to be used by freight trains for a further four years and oil traffic to the north from the refinery at Fawley near Southampton was a regular feature. In 1966 however, this traffic also was withdrawn, and the line was then dismantled. The last passenger train was a re-routed Pines Express in May 1964, diverted due to a derailment at Reading West. A section of the abandoned embankment towards Upton, now designated as a Sustrans route, has views across the town and countryside.

Didcot is currently home to around 26,000 people. The new town centre, the Orchard Centre, was opened in August 2005. As part of the Science Vale Enterprise Zone, Didcot is surrounded by one of the largest scientific clusters in the United Kingdom. There are a number of major science and technology campuses nearby, including the Culham Science Centre, Harwell Science and Innovation Campus, and Milton Park. The Diamond Light Source synchrotron, based at the Harwell Campus, is the largest UK-funded scientific facility to be built for over thirty years.

In 2008 a new £8 million arts and entertainment centre, Cornerstone, opened within the Orchard Centre. It contains exhibition and studio spaces, a cafe and a 236-seat auditorium. Designed by Ellis William Architects, the centre is clad with silvered aluminium panels and features a Window Wall, used to connect the building with passing shoppers.

The United Kingdom government named Didcot a Garden town in 2015, the first existing town to gain this status, providing funding to support sustainable and environmentally-friendly town development over the coming 15 years.

The British Army has a presence within the town at Vauxhall Barracks which is situated on the edge of town. The regimental headquarters of 11 Explosive Ordnance Disposal Regiment RLC is based here. 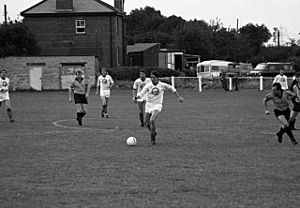 Didcot Town Football Club's home ground is the Draycott Engineering Loop Meadow Stadium on the Ladygrove Estate, having moved from their previous pitch off Station Road in 1999 to make way for the new supermarket development. The club currently play in the 8th tier of the English Football League system. Most notable achievements include winning the FA Vase in 2005 and reaching The FA Cup 1st Round in 2015.

Didcot has its own chapter of the Hash House Harriers. The club started in 1986 (the first run was on 8 April of that year).

Didcot Choral Society, founded in 1958, performs three concerts a year in various venues around the town as well as an annual tour (Paris in 2008, Belgium in 2009).

Didcot Dragons Korfball club was founded in 2003. The club has now expanded to two teams in the OKA Division 2 North. They train in Willowbrook Leisure Centre in the winter, and St Birinus School in the summer.

Didcot Phoenix cycle club was founded in 1973 and is represented by over 70 members who participate in a range of cycling activities including touring, time trials, road racing, Audax, cyclocross and off road events.

The Didcot & District Table Tennis Association (DDTTA) was established in 1949 to promote the playing of table tennis in the Didcot area. It organises an annual league competition containing affiliated teams from towns and villages across south Oxfordshire.

Didcot Runners is an AAA affiliated running club that meets every Tuesday & Thursday for group runs and fitness sessions at Didcot Town Football Club. Its members participate in running races across the country.

Didcot's synonymous connection with railways was noted in Douglas Adams and John Lloyd's humorous book the Meaning of Liff, published in 1983. The book, a "dictionary of things that there aren't any words for yet", referred to "a Didcot" as "The small, oddly-shaped bit of card which a ticket inspector cuts out of a ticket with his clipper for no apparent reason". Didcot is also referenced in Ricky Gervais' comedy feature film: David Brent: Life on the Road, the song "Lady Gypsy" on the film's soundtrack tells of a romantic meeting "by the lakeside, just south of Didcot".

All content from Kiddle encyclopedia articles (including the article images and facts) can be freely used under Attribution-ShareAlike license, unless stated otherwise. Cite this article:
Didcot Facts for Kids. Kiddle Encyclopedia.