Judge Joseph Dredd is a fictional character created by writer John Wagner and artist Carlos Ezquerra. He first appeared in the second issue of 2000 AD (1977), a weekly comic magazine. He is the magazine's longest-running character. He also appears in a number of movie and video games.

Joseph Dredd is a law enforcement and judicial officer in the dystopian (unpleasant) future city of Mega-City One, which covers most of the east coast of North America. Mega-City One's population lives in gigantic tower blocks, each holding some fifty thousand or so people. He is a "street judge", empowered to arrest, convict, sentence, and execute criminals. Dredd is actually one of a number of clones of Chief Judge Fargo.

Judge Dredd made his live action debut in 1995 in Judge Dredd, portrayed by Sylvester Stallone. Later he was portrayed by Karl Urban in the 2012 adaptation Dredd.

In May 10, 2017, Entertainment Weekly announced that independent entertainment studio IM Global and Rebellion have partnered to develop a live-action TV show called Judge Dredd: Mega-City One. The show is planned to be a drama about a team of Judges as they deal with the challenges of the future-shocked 22nd century. 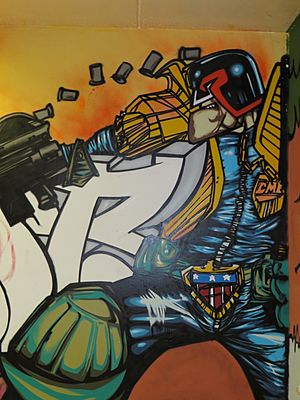 Joseph Dredd is the most famous of the Street Judges that patrol Mega-City One. Dredd is armed with a "Lawgiver", a pistol programmed to recognise only his palm-print, and capable of firing six types of ammunition, a daystick, a boot knife and stun or gas grenades. He rides a large "Lawmaster" motorcycle equipped with machine-guns, a powerful laser cannon, and full artificial intelligence capable of responding to orders from the Judge and operating itself.

His helmet hides his face, except for his mouth and jaw. Dredd's entire face is never shown in the strip. On rare occasions, Dredd's face has been seen in flashbacks to his childhood; but these pictures lack detail.

Time passes in the Judge Dredd strip in real time, so as a year passes in life, a year passes in the comic. The first Dredd story, published in 1977, was set in 2099, every year that goes by Dredd gets a year older – unlike Spider-Man, who has been a university student for the past twenty-five years. Therefore Dredd is over seventy years old, with sixty years of active service.

All content from Kiddle encyclopedia articles (including the article images and facts) can be freely used under Attribution-ShareAlike license, unless stated otherwise. Cite this article:
Judge Dredd Facts for Kids. Kiddle Encyclopedia.