Table tennis, also known as Ping Pong (a trademarked name), is one of the most popular sports in the world, with players in many countries. It is played by two or four people on a table. To play this game, people use bats and small celluloid balls. You need also a net and a table. Table tennis was invented in England in 1880.

The International Table Tennis Federation (ITTF), the worldwide organization, was founded in 1926. Table tennis has been an Olympic sport since 1988. Many of the best players in the world today come from China.

The international rules specify that the game is played with a sphere having a mass of 2.7 grams (0.095 oz) and a diameter of 40 millimetres (1.57 in). The rules say that the ball shall bounce up 24–26 cm (9.4–10.2 in) when dropped from a height of 30.5 cm (12.0 in) onto a standard steel block thereby having a coefficient of restitution of 0.89 to 0.92. Balls are now made of a polymer instead of celluloid as of 2015, colored white or orange, with a matte finish. The choice of ball color is made according to the table color and its surroundings. For example, a white ball is easier to see on a green or blue table than it is on a grey table. Manufacturers often indicate the quality of the ball with a star rating system, usually from one to three, three being the highest grade. As this system is not standard across manufacturers, the only way a ball may be used in official competition is upon ITTF approval (the ITTF approval can be seen printed on the ball).

The 40 mm ball was introduced after the end of the 2000 Summer Olympics. This created some controversies. Then World No 1 table tennis professional Vladimir Samsonov threatened to pull out of the World Cup, which was scheduled to debut the new regulation ball on October 12, 2000. 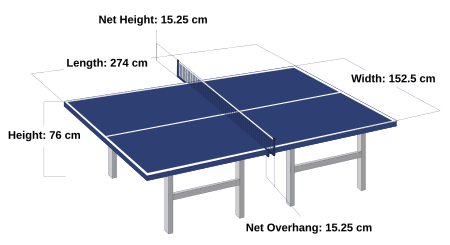 Diagram of a table tennis table showing the official dimensions

The table is 2.74 m (9.0 ft) long, 1.525 m (5.0 ft) wide, and 76 cm (2.5 ft) high with any continuous material so long as the table yields a uniform bounce of about 23 cm (9.1 in) when a standard ball is dropped onto it from a height of 30 cm (11.8 in), or about 77%. The table or playing surface is uniformly dark coloured and matte, divided into two halves by a net at 15.25 cm (6.0 in) in height. The ITTF approves only wooden tables or their derivates. Concrete tables with a steel net or a solid concrete partition are sometimes available in outside public spaces, such as parks.

Players are equipped with a laminated wooden racket covered with rubber on one or two sides depending on the grip of the player. The ITTF uses the term "racket", though "bat" is common in Britain, and "paddle" in the U.S. and Canada.

The wooden portion of the racket, often referred to as the "blade", commonly features anywhere between one and seven plies of wood, though cork, glass fiber, carbon fiber, aluminum fiber, and Kevlar are sometimes used. According to the ITTF regulations, at least 85% of the blade by thickness shall be of natural wood. Common wood types include balsa, limba, and cypress or "hinoki", which is popular in Japan. The average size of the blade is about 17 centimetres (6.7 in) long and 15 centimetres (5.9 in) wide, although the official restrictions only focus on the flatness and rigidity of the blade itself, these dimensions are optimal for most play styles.

Table tennis regulations allow different surfaces on each side of the racket. Various types of surfaces provide various levels of spin or speed, and in some cases they nullify spin. For example, a player may have a rubber that provides much spin on one side of their racket, and one that provides no spin on the other. By flipping the racket in play, different types of returns are possible. To help a player distinguish between the rubber used by his opposing player, international rules specify that one side must be red while the other side must be black. The player has the right to inspect their opponent's racket before a match to see the type of rubber used and what colour it is. Despite high speed play and rapid exchanges, a player can see clearly what side of the racket was used to hit the ball. Current rules state that, unless damaged in play, the racket cannot be exchanged for another racket at any time during a match. 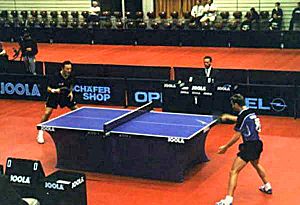 According to ITTF rule 2.13.1, the first service is decided by lot, normally a coin toss. It is also common for one player (or the umpire/scorer) to hide the ball in one or the other hand, usually hidden under the table, allowing the other player to guess which hand the ball is in. The correct or incorrect guess gives the "winner" the option to choose to serve, receive, or to choose which side of the table to use. (A common but non-sanctioned method is for the players to play the ball back and forth three times and then play out the point. This is commonly referred to as "serve to play", "rally to serve", "play for serve", or "volley for serve".) 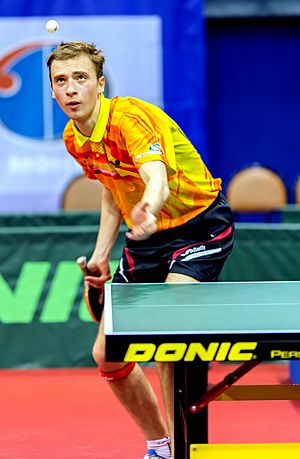 In game play, the player serving the ball commences a play. The server first stands with the ball held on the open palm of the hand not carrying the paddle, called the freehand, and tosses the ball directly upward without spin, at least 16 cm (6.3 in) high. The server strikes the ball with the racket on the ball's descent so that it touches first his court and then touches directly the receiver's court without touching the net assembly. In casual games, many players do not toss the ball upward; however, this is technically illegal and can give the serving player an unfair advantage.

The ball must remain behind the endline and above the upper surface of the table, known as the playing surface, at all times during the service. The server cannot use his/her body or clothing to obstruct sight of the ball; the opponent and the umpire must have a clear view of the ball at all times. If the umpire is doubtful of the legality of a service they may first interrupt play and give a warning to the server. If the serve is a clear failure or is doubted again by the umpire after the warning, the receiver scores a point.

If the service is "good", then the receiver must make a "good" return by hitting the ball back before it bounces a second time on receiver's side of the table so that the ball passes the net and touches the opponent's court, either directly or after touching the net assembly. Thereafter, the server and receiver must alternately make a return until the rally is over. Returning the serve is one of the most difficult parts of the game, as the server's first move is often the least predictable and thus most advantageous shot due to the numerous spin and speed choices at his or her disposal.

A Let is a rally of which the result is not scored, and is called in the following circumstances: 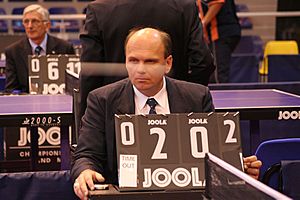 A point is scored by the player for any of several results of the rally:

Alternation of services and ends

Service alternates between opponents every two points (regardless of winner of the rally) until the end of the game, unless both players score ten points or the expedite system is operated, when the sequences of serving and receiving stay the same but each player serves for only one point in turn (Deuce). The player serving first in a game receives first in the next game of the match.

After each game, players switch sides of the table. In the last possible game of a match, for example the seventh game in a best of seven matches, players change ends when the first player scores five points, regardless of whose turn it is to serve. If the sequence of serving and receiving is out of turn or the ends are not changed, points scored in the wrong situation are still calculated and the game shall be resumed with the order at the score that has been reached. 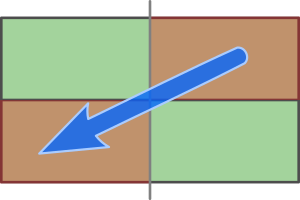 In addition to games between individual players, pairs may also play table tennis. Singles and doubles are both played in international competition, including the Olympic Games since 1988 and the Commonwealth Games since 2002. In 2005, the ITTF announced that doubles table tennis only was featured as a part of team events in the 2008 Olympics.

In doubles, all the rules of single play are applied except for the following.

A line painted along the long axis of the table to create doubles courts bisects the table. This line's only purpose is to facilitate the doubles service rule, which is that service must originate from the right hand "box" in such a way that the first bounce of the serve bounces once in said right hand box and then must bounce at least once in the opponent side's right hand box (far left box for server), or the receiving pair score a point.

Order of play, serving and receiving

All content from Kiddle encyclopedia articles (including the article images and facts) can be freely used under Attribution-ShareAlike license, unless stated otherwise. Cite this article:
Table tennis Facts for Kids. Kiddle Encyclopedia.