Didcot Railway Centre is a former Great Western Railway engine-shed and locomotive stabling point located in Didcot, Oxfordshire, England, which today has been converted into a railway museum and preservation engineering site.

The founders and commercial backers of the GWR supported Isambard Kingdom Brunel's scheme to develop an integrated railway and steam-ship service which allowed trans-Atlantic passengers and freight quicker passage to and from London to New York City. However, whilst backing the scheme the railway had to make a profit, and so it took a number of detours and added both mainline and branchline traffic to increase its domestic earnings. This earned the railway the nickname The Great Way Round from its detractors.

Whilst the route from London Paddington to Reading was relatively straight, the then obvious most direct route to Bristol would have taken the railway further south, thus avoiding both Didcot and Swindon. However, passenger and freight traffic both to and from Oxford and onwards to the West Midlands in part dictated a more northerly route. Secondly Brunel had originally planned to cut through Savernake Forest near Marlborough, Wiltshire to Bristol, but the Marquess of Ailesbury, who owned the land, objected - having previously objected to part of the Kennet and Avon Canal running through his estate (see Bruce Tunnel). With the railway needing to run near to a canal at its midpoint - as it was cheaper to transport coal for trains along canals at this time - and with need for the branch northwards to Cheltenham via Stroud, Swindon was the next logical choice for the junction (and later railway works), 20 miles (32 km) north of the original route. This dictated that the Oxford junction also be moved northwards, and hence via Didcot. The Great Western Railway built the first rail line through Didcot in 1839 and opened its first station in 1844. 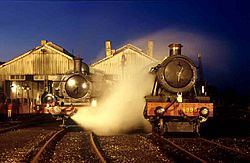 After World War II, the site remained virtually unchanged during the nationalised ownership of British Railways (BR), but for taking on the new code of 81E. The standard allocation of locomotives remained the same, with Halls, Dukedogs and Panniers making up the bulk of the depot's fleet.

With the replacement of steam with diesel traction under the Modernisation Plan, the shed became redundant and was closed in June 1965.

The Great Western Society (GWS) was offered the use of the former Didcot locomotive depot, taking it over in 1967. In the 1970s, the Society negotiated a long-term lease with BR which was to expire in 2019. But this was subject to a six-month termination clause which could force the GWS to quit the site, and which could be operated at any point in time by lease-holder Network Rail (NR).

In an attempt to secure a long-term future for the society, in 2002 the GWS opened negotiations with NR to either purchase the site or extend the lease. In a letter dated May 2007, NR informed the GWS that they were prepared to sell the site subject to Office of Rail Regulation (ORR) approval. It had been thought the site could be subject to need as a depot, either due to: the rebuilding of Reading station; a Crossrail project depot; or the Intercity Express Programme. After expressing some concern at the slow speed of negotiations at the GWS annual meeting in September 2008, NR wrote to the GWS to advise that the site was no longer available for sale, and although a lease extension was still on offer it was still subject to the previous six-month termination clause. The GWS then wrote to their local MP Ed Vaizey, and placed any long-term development plans on hold. As of 6 October  2011 (2011 -10-06)[update] Richard Croucher (Chairman of the Great Western Society) signed a new 50-year lease with Network Rail, therefore preserving the site for at least another 50 years. 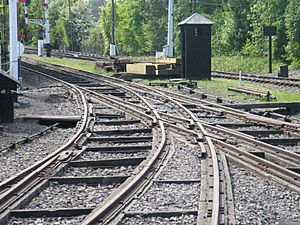 A reconstruction of Isambard Kingdom Brunel's atmospheric railway, using a segment of the original piping at Didcot Railway Centre

Today the GWS have developed the site, which still retains many of the original GWR buildings and features, as both a working steam locomotive and railway museum, engineering maintenance centre, and railway line offering short rides to visitors.

Access via Didcot Parkway station brings the visitor into the southern end of the site, at the start of the ramp coal wagons would take up to the coaling stage. Beyond this is the original 1932 four-road engine shed, and beyond this the original repair shed and 1988 constructed locomotive works, both of which have restricted access due to safety concerns. Beyond this lies a Ransomes & Rapier 70 feet (21 m) turntable and pit, originally built for the Southern Railway and installed at Southampton Docks.

The centre regularly holds events such as steam and diesel railcar days. Members of the Great Western Society are active in the preservation of locomotives and rolling stock. Certain 'new-build' projects to create locomotives that did not escape wholesale scrapping are also undertaken at Didcot, such as the completed Firefly locomotive, a 'Saint' class (using a 'Hall' class chassis and boiler) and a 'County' class locomotive (using a 'Hall' class chassis and an LMS '8F' class boiler).

The Railway Centre is used a period film set and has featured in works including Anna Karenina, Sherlock Holmes: A Game of Shadows and The Elephant Man. 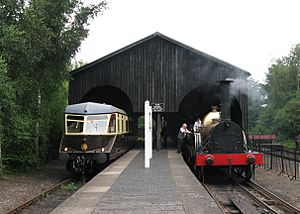 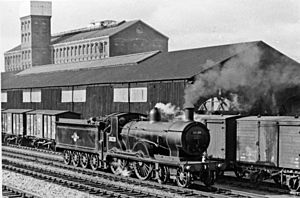 The broad-gauge transfer shed in its original location, with the provender store behind

There are three short lengths of running track, each with a station at both ends:

The railway centre is entirely surrounded by active railway lines and has no road connection of any kind. Public access is on foot from a subway at Didcot Parkway station, which links the centre by rail to London and much of southern and central England. Wheelchair and pram access is practically nonexistent; they have to be carried up a flight of concrete steps. Although this contravenes the Disability Discrimination Act, the Great Western Society is unable to improve it since the site is owned by Network Rail.

The GWS has an extensive supporting collection of GWR rolling stock, including three of the GWR Super Saloons that serviced the boat train traffic to Plymouth.

Two Broad Gauge replica carriages were also made by the GWS:

All content from Kiddle encyclopedia articles (including the article images and facts) can be freely used under Attribution-ShareAlike license, unless stated otherwise. Cite this article:
Didcot Railway Centre Facts for Kids. Kiddle Encyclopedia.