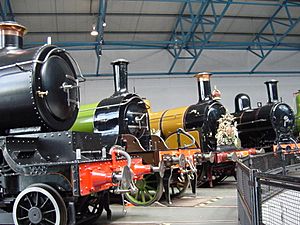 Some locomotives on display at the National Railway Museum

The National Railway Museum (NRM) is a museum in York forming part of the British Science Museum Group of National Museums. It tells the story of rail transport in Great Britain and its impact on society. It has won many awards, including the European Museum of the Year Award in 2001. It is the home of the national collection of historically significant railway vehicles. There is also a collection of other artefacts and both written and pictorial records.

All content from Kiddle encyclopedia articles (including the article images and facts) can be freely used under Attribution-ShareAlike license, unless stated otherwise. Cite this article:
National Railway Museum Facts for Kids. Kiddle Encyclopedia.