LNER Class A4 facts for kids 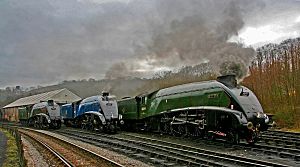 The LNER Class A4 was a type of steam locomotive made in England in 1935. It was designed by Sir Nigel Gresley for the London North Eastern Railway. 35 locomotives were built in total.

Six A4s still exist today. The rest were scrapped when steam stopped being used to power trains in Britain.

All content from Kiddle encyclopedia articles (including the article images and facts) can be freely used under Attribution-ShareAlike license, unless stated otherwise. Cite this article:
LNER Class A4 Facts for Kids. Kiddle Encyclopedia.