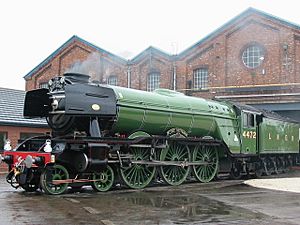 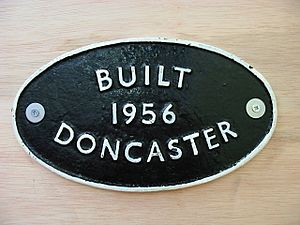 Doncaster railway works is a plant in Doncaster, South Yorkshire, England. When it was set up by the Great Northern Railway in 1853, it replaced the previous works in Boston and Peterborough.

Until 1867 it did only repairs and maintenance. In 1866, Patrick Stirling was appointed as Locomotive Superintendent, and the first of the 875 class was built in 1886. At this time the works also began building new coaches. In 1873 they built the first sleeping cars; in 1879 the first dining cars in the United Kingdom; and in 1882 the first corridor coaches. In 1891, 99 locomotives, 181 carriages and 1493 wagons were built.

In 1957, the last of over two thousand steam locomotives was built. Carriage building finished in 1962. The works was modernised with the addition of a diesel locomotive repair shop. Under BREL, new diesel shunters and 25 kV electric locomotives were built, also Class 56 and Class 58 diesel locomotives. In July 2003 the works celebrated its 150th anniversary with an open weekend.

Owners Wabtec closed the train engine plant in 2007. In early 2008 the main locomotive repair shop was demolished to make way for housing. Wabtec still does passenger fleet refurbishment at the Doncaster site.

All content from Kiddle encyclopedia articles (including the article images and facts) can be freely used under Attribution-ShareAlike license, unless stated otherwise. Cite this article:
Doncaster Works Facts for Kids. Kiddle Encyclopedia.