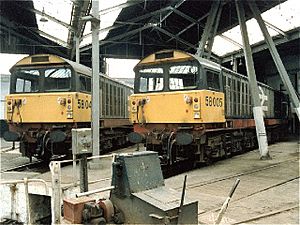 The British Rail Class 58 is a class of Co-Co diesel locomotive designed for heavy freight. Introduced in 1982, they followed American practice of modularisation. From new they were painted in grey Railfreight Sector livery, instead of BR blue. EWS withdrew them in 2002 after 20 years in service, though 30 were subsequently hired abroad—four to the Netherlands, eight to Spain, and twenty to France.

All content from Kiddle encyclopedia articles (including the article images and facts) can be freely used under Attribution-ShareAlike license, unless stated otherwise. Cite this article:
British Rail Class 58 Facts for Kids. Kiddle Encyclopedia.