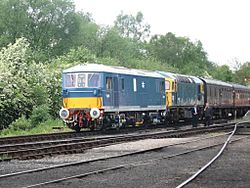 A Class 73 and a Class 33 locomotive being coupled for multiple working.

If the front locomotive of a pair in multiple has failed the driver can still control the rear locomotive for as long as air and electricity supplies are available on the failed locomotive.

All content from Kiddle encyclopedia articles (including the article images and facts) can be freely used under Attribution-ShareAlike license, unless stated otherwise. Cite this article:
Multiple working Facts for Kids. Kiddle Encyclopedia.