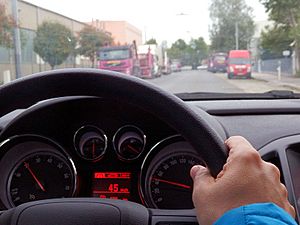 Several representations of "kilometres per hour" have been used since the term was introduced and many are still in use today; for example, dictionaries list "km/h", "kmph" and "km/hr" as English abbreviations.

Abbreviations for "kilometres per hour" did not appear in the English language until the late nineteenth century. In Australian unofficial usage, km/h is sometimes pronounced and written as klicks or clicks.