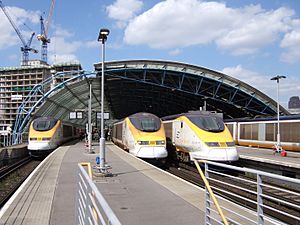 Waterloo International was the first London station for Eurostar trains to France and Belgium. It was treated as a separate station to the main station at London Waterloo, but its 5 platforms were numbered 20 to 24. In 2007 it closed and all Eurostar trains now run from St Pancras International railway station. The platforms are no longer used, but South West Trains now plans to use at least one of the platforms when it starts running trains with 10 carriages in late 2013.

All content from Kiddle encyclopedia articles (including the article images and facts) can be freely used under Attribution-ShareAlike license, unless stated otherwise. Cite this article:
Waterloo International railway station Facts for Kids. Kiddle Encyclopedia.