Museum of the Great Western Railway facts for kids

STEAM – Museum of the Great Western Railway, also known as Swindon Steam Railway Museum, is located at the site of the old railway works in Swindon, England – Wiltshire's 'railway town'. The museum opened in 2000 and replaced the former GWR Museum, which was located on Faringdon Road in Swindon, which had opened on 22 June 1962.

Apart from the museum itself, the site has become home to the McArthurGlen Designer Outlet and, since 2005, the Head Office of the National Trust. 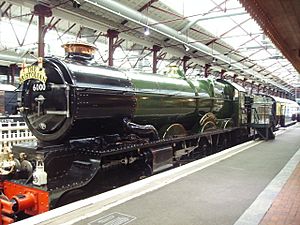 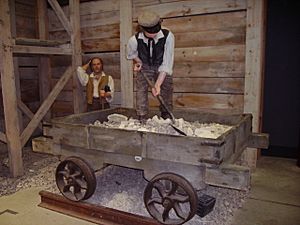 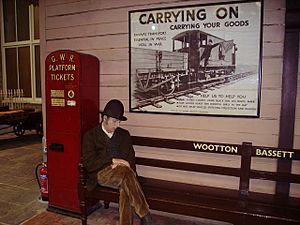 The museum is housed in a restored Grade II listed railway building. This was part of the old Swindon Works of the Great Western Railway, which was one of the largest in the world and operated from 1843 to 1986. In its heyday, it covered more than 300 acres (120 ha), and could turn out three locomotives per week.

Apart from many exhibits of interest to railway engine and rolling stock enthusiasts, it tells the social story of the railway community in Swindon, with recorded personal experiences and film archives. Lifelike exhibits show people at work and human interactions. There are exhibits explaining the construction of locomotives, of railway equipment and of the railways themselves. It also tells the history of the Great Western Railway and the life of Isambard Kingdom Brunel, the famous Victorian engineer, who masterminded the Great Western Railway. There are many hands-on exhibits and interactive displays. Enthusiastic ex-railway workers are on hand, to give a personal insight into many of the exhibits.

There is a series of reconstructions of areas of work, such as office, stores, workshop, signal box and foundry.

The museum holds a massive archive of books, periodicals, photographs, drawings and plans, relating to the Great Western Railway.

The museum is near Swindon's town centre, adjacent to the McArthur Glen Designer Outlet Village. It is located at Ordnance Survey mapping six-figure .

The 1962 Great Western Museum, Swindon had five locomotives on display, North Star, 3717 City of Truro, 4003 Lode Star, Dean Goods 2516 and pannier tank 9400 in the Churchward Gallery. In addition it had a selection of nameplates and some models and ephemera. Two rooms were dedicated to Isambard Kingdom Brunel and Daniel Gooch respectively. 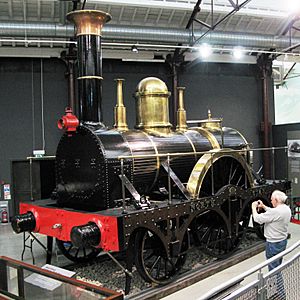 The museum is home to several GWR pre-nationalization-era locomotives, two of which are the first members of their respective classes. The majority of these are part of the UK National Collection.

The museum also displays a small collection of Great Western rolling stock and equipment, including:

All content from Kiddle encyclopedia articles (including the article images and facts) can be freely used under Attribution-ShareAlike license, unless stated otherwise. Cite this article:
Museum of the Great Western Railway Facts for Kids. Kiddle Encyclopedia.