Shildon is a town in County Durham, in England. The population taken at the 2011 Census was 9,976. It is situated 2 miles (3.2 km) south east of Bishop Auckland, 11 miles (18 km) north of Darlington, 13 miles (21 km) from Durham, 23 miles (37 km) from Sunderland and 30 miles (48 km) from Newcastle upon Tyne. Shildon is part of the Bishop Auckland parliamentary constituency, which has been represented since 2005 by Helen Goodman MP for the Labour Party.

Shildon's earliest settlers were groups of people who lived during the Mesolithic period some 6,000 years ago. They lived by collecting wild plants and hunting wild animals. There was a small prehistoric flint tool found in the Brusselton area which may have been of this date.

Romans arrived in County Durham in the 1st century AD and built a line of forts along the Roman road leading north to Hadrian's Wall. Traces of Roman roads have been found at several places in Shildon, such as Brusselton Wood. Small settlements grew up in places alongside the course of the road.

By the end of the Anglo-Saxon period the village was established as one of the settlements in the area. Various mediaeval settlements stood around Thickley.

The Shildon area owes its growth to the rise of the East Durham coalfields in the Industrial Revolution of the late 18th and early 19th century. 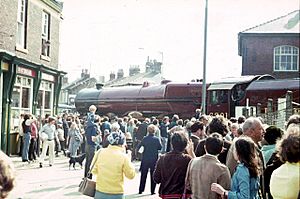 The expansion of coal mining during the Industrial Revolution meant the traditional way of moving the coal along horse-drawn wagon ways was insufficient. Steam engines were introduced. At first static engines pulled the wagons, but were replaced by moving engines on railways.

Shildon is considered to be the "cradle of the railways". The town grew when the Stockton and Darlington Railway established its workshops in 1825. Steam locomotives such as the Sans Pareil and Royal George were built there. During this period the population grew to around 9,000. By 1855 it was a large complex of workshops and other buildings. After the Second World War, Shildon had one of the biggest sidings complexes in Europe. The Shildon Works eventually closed in 1984. The site now houses Shildon Locomotion Museum, which opened in September 2004 and is an extension of the National Railway Museum.

George Stephenson built a track from Witton Park to Stockton-on-Tees. Static engines pulled the coal wagons over Brussleton, after which they were attached to steam engines. The remains of a static engine house can be seen at Brusselton. Originally the railway carried only coal, but demand led to passengers being carried. The first passenger train began its journey in Shildon on 27 September 1825.

Shildon was the home of Timothy Hackworth, an innovator of the railway industry and builder of one of the first ever engines, the Sans Pareil. It is also the birthplace of Daniel Adamson, Hackworth's apprentice and engineer.

Shildon and the Locomotion Museum are served by Shildon railway station on the Tees Valley Line.

All content from Kiddle encyclopedia articles (including the article images and facts) can be freely used under Attribution-ShareAlike license, unless stated otherwise. Cite this article:
Shildon Facts for Kids. Kiddle Encyclopedia.