Locomotion No. 1 facts for kids

Locomotion No. 1 was ordered by the Stockton and Darlington Railway Company in September 1824; its design benefitted from George Stephenson's experience building his series of Killingworth locomotives. It is believed that Locomotion No. 1 was the first locomotive to make use of coupling rods to link together its driving wheels, reducing the chance of the wheels slipping on the iron rails. However, the centre-flue boiler proved to be a weakness, providing for a poor heating surface compared to later multi-flue boilers.

In September 1825, Locomotion No. 1 hauled the first train on the Stockton and Darlington Railway, and became the first locomotive to run on a public railway. On 1 July 1828, it was heavily damaged when its boiler exploded at Aycliffe Lane station, resulting in the death of its driver, John Cree. It was rebuilt but, as a consequence of the rapid advances in locomotive design, Locomotion No. 1 became obsolete within a decade. It was used on the railway until 1841, after which it was converted into a stationary engine. In 1857, as a consequence of its historical importance, Locomotion No. 1 was preserved and put on display. Between 1892 and 1975, it was on static display at one of the platforms at Darlington Bank Top railway station. It is presently at the NRM Locomotion museum. A working replica of Locomotion has also been built and following years of operation at Beamish Museum it was on static display in Darlington at the Head of Steam Museum. It has now been moved to NRM Shildon until 2024 where it will return to its hometown for a 6-month period to celebrate the 200th anniversary of the D&S Railway.

On 23 June 1823, the pioneering locomotive manufacturer Robert Stephenson and Company was established by the railway engineers George Stephenson and his son Robert Stephenson, and the businessmen Edward Pease and Thomas Richardson. In November of that year, only months after the company started operations, a key order was placed by the Stockton & Darlington Railway Company for four stationary engines. 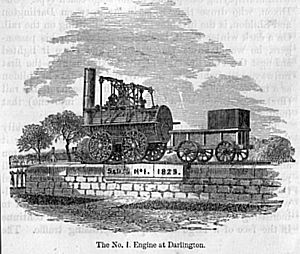 The No. 1 engine, called Locomotion, for the Stockton & Darlington Railway

The design of Locomotion combined and built on the improvements that George Stephenson had incorporated in his Killingworth locomotives. The locomotive weighed 6.6 tonnes, with many elements, including the boiler, cylinders and wheels, composed of cast iron, although the frame was timber. There were four 4 feet (1.2 m) diameter driving wheels.

Locomotion No. 1 used high-pressure steam generated in a centre-flue boiler and driving a pair of vertical cylinders, 9 inches (230 mm) in diameter, which were half embedded within the boiler. The boiler had a blastpipe in the chimney. The single flue boiler had a low heating surface-to-water ratio compared to later boiler designs. The maximum speed of Locomotion No. 1 was about 15 mph (24 km/h). A pair of cross-heads above the cylinders transmitted the power through a pair of coupling rods, making use of a loose eccentric valve gear. Locomotion No. 1 is believed to have been the first locomotive to use coupling rods to connect its driving wheels together, an approach which considerably decreased the chance of slipping.

According to author H. C. Casserley, Locomotion No. 1 is most notable for being the first locomotive to haul a passenger train on a public railway than for the innovations in its design.

The completed Locomotion No.1 was transported by road from Newcastle to Darlington in September 1825. On 26 September, the day before the opening of the Stockton and Darlington Railway, the locomotive was taken on a trial run between Shildon and Darlington, with a number of the railway's directors aboard the railway's first passenger coach, known as ‘’Experiment’’. The driver was James Stephenson, the elder brother to George Stephenson, who had to perch on a small platform beside the boiler; the fireman, William Gowling, stood on a footplate between the engine and the tender.

On 27 September 1825, Locomotion No.1 hauled the first train on the Stockton and Darlington Railway, driven by George Stephenson. The train consisted of Locomotion No.1, eleven wagons of coal, the carriage ‘’Experiment’’, and a further 20 wagons of passengers, guests, and workmen. Around 300 tickets had been sold but about twice as many people were believed to have been aboard. The train, which had an estimated weight of 80 tonnes was about 400 feet (120 m) long, reached a maximum speed of 12 miles per hour (19 km/h)), and took two hours to complete the first 8.7 miles (14.0 km) of the journey to Darlington, but was slowed by a derailed wagon and a blocked feed pump valve, thus only achieving an average speed of 8 miles per hour (13 km/h).

Locomotion No. 1 continued to haul trains on the S&DR for three years. On 1 July 1828, the locomotive was heavily damaged when the boiler exploded while the train was stopped at Aycliffe Lane station, resulting in the death of the driver, John Cree, and the wounding of water pumper, Edward Turnbull. Cree had tied down the arm of a safety valve, which caused the boiler pressure to rise to the point of explosion.

Locomotion No. 1 was rebuilt and returned to service and ran until 1850. On 4 June 1846, it hauled the opening train on the Middlesbrough and Redcar Railway, a subsidiary of the S&DR.

Following its withdrawal, Locomotion was purchased by Joseph Pease and Partners, converted into a stationary pumping engine for use at their West Collieries in South Durham, where it was used until 1857.

Locomotion 1 is such an important part of Darlington's history that it is depicted on the town's coat of arms, and on the badges of its football and rugby clubs.

In 1856, Joseph Pease and his family spent £50 to restore the S&DR Company's Locomotion No. 1, saving it from the scrapyard when its working life had ended; it was one of the first locomotives to be restored for preservation.

On a hot Saturday, 6 June 1857 at 1 pm with flags flying outside the North Road station near the Alfred Kitching works, a band and procession arrived for the ceremony of laying the foundation for a pedestal on which to erect Locomotion No. 1. The task was to have fallen to Edward Pease – an invitation to do that declined by letter read out on the day – it concluded 'declining the kindness of your proposition, I subscribe myself, with much respect, your friend, Edward Pease. The abundance of my years must apologise for very much in this letter.'

The stone was instead laid by the S&DR treasurer & Edward's son Joseph Pease. Cannon were fired in celebration. Speeches were made.

The late George Stephenson was remembered and his son Robert, along with Hackworth and Murray. Thomas MacNay addressed the crowd as did John Dixon, and a speech made by Henry Pease from the newly laid stone, included his rejoicing 'in the fact that their first locomotive [Locomotion No. 1] was about to be placed in a suitable position, so as to hand down to posterity a memorial of one of the greatest events the civilised world ever witnessed'. The crowd cheered.

A procession of the railway officials [about 70] made their way to the Sun Inn for a meal, further speeches were made, toasts made and their meeting held. They adjourned to Pierremont, the home of Henry Pease, for tea and entertainment of cricket, quoits, etc., in the grounds.

Between 1857 and the 1880s, it was usually on the pedestal display at Alfred Kitching's workshop near the Hopetown Carriage Works. It was on exhibition in Philadelphia in 1876, Newcastle in 1881, Chicago in 1883, Liverpool in 1886, Newcastle in 1887, Paris in 1889, Edinburgh in 1890. Locomotion No.1 was steamed for the Stockton and Darlington Railway's Golden Jubilee in September 1875, as well as to participate in a procession of locomotives at the George Stephenson Centenary, in June 1881. Locomotion always returned to its static display in Darlington, the headquarters of the Stockton and Darlington Railway Company.

From 1892 to 1975, Locomotion was on static display along with Derwent, another early locomotive, on one of the platforms overlooking the S&DR line to Saltburn-by-the-Sea at Darlington's main station Bank Top. During 1924, it was cosmetically restored. During the Second World War, it was temporarily relocated [at Stanhope] due to the threat of bombing. In 1975 Darlington built its railway museum around Locomotion No. 1.

As ownership of the railways changed, the locomotive became a British Rail historic item, all of which were transferred as the National Collection in 1968 to the National Railway Museum (NRM), now part of the Science Museum Group (SMG). The locomotive, as its ownership changed, has remained in Darlington since 1857, in later years on display at the Head of Steam museum in Darlington, in the same building as Darlington's North Road station. Since 1975 it been formally on loan by the NRM to Head of Steam. At the end of a loan contract on 31 March 2021 the NRM wants to move it to its museum in Shildon, named Locomotion. Darlington council objects to the move, as the locomotive has always been in and associated with Darlington, and is depicted on the town's coat of arms and on the badges of its football and rugby clubs, and is only owned by the NRM due to an accident of history.

As the original locomotive is too fragile to return to steam, a working replica was built in 1975, and is resident at Beamish Museum. It was removed from Head of Steam Museum by NRM Shildon on 7 March 2021.

All content from Kiddle encyclopedia articles (including the article images and facts) can be freely used under Attribution-ShareAlike license, unless stated otherwise. Cite this article:
Locomotion No. 1 Facts for Kids. Kiddle Encyclopedia.