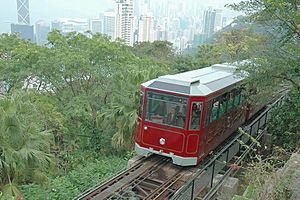 The Peak Tram in Hong Kong is a funicular railway.

A funicular is a railway that uses trains that are pulled by cables wound around a pulley. This makes them able to climb very steep slopes, like those on hills and mountains.

All content from Kiddle encyclopedia articles (including the article images and facts) can be freely used under Attribution-ShareAlike license, unless stated otherwise. Cite this article:
Funicular Facts for Kids. Kiddle Encyclopedia.